This article is last part of a two-part analysis on the emergence of Hindutva Organisations in West Bengal. The first part can be read here – Emergence of Brahminical Fascism in West Bengal

After the defeat of Indira Gandhi in 1977, the Left Front government came to power. They declared to give relief to people of Bengal and claimed that their government will become a weapon of mass movement. Over the decades it has been proved to be a false claim. In the initial years definitely, there were some reforms in rural sectors and government sector, but gradually it followed the footsteps of neoliberal economy since 1990.

West Bengal was the first state to approve SEZ in the name of ‘development’ and land reforms were stopped. They started occupying lands for multi-national corporations and started contractual employee recruitment in government sectors. Buddhadeb Bhattacharya, the then Chief Minister of West Bengal from CPI(M), in an interview said, “I am clear in my mind. This is capitalism……I have to follow capitalism.” (Hindustan Times, July 20, 2007)

Corruption and nepotism went hand in hand, agriculture was in crisis and manufacturing sectors were destroyed. Non-farm sector flourished in rural Bengal with development of a ‘new rich’ community of real estate businessman, contractors and suppliers in different government and non-government sectors. This new social force was recruited from CPI(M) party cadres or inducted inside the organization. They were the resource for CPI(M)’s fund, muscle power and mass mobilization. Buddhadeb Bhattacharya, on numerous occasions demonized worker’s rights including referring bandhs as ‘bad’ and gherao as ‘illegal’. (The Economic Times, August 27, 2008) He also expressed his concerns over trans-border migration from Bangladesh without any statistics and once stated that “Madrasas are cradle of terrorist activities.” (The Economic Times, October 21, 2014) Believe it or not!

Therefore, even in the period of Left Front rule in West Bengal there was no significant difference from other states in terms of economics and politics.

What was the position of RSS & BJP during Left Front rule?

Present Scenario and Our Task

The emergence of BJP should be related with the gradual strengthening of contractor, promoter and supplier in the economic life of West Bengal. It started from Left Front regime and became stronger during TMC rule. The TMC leaders, including their family members starting from top to bottom, have been involved in Ponzi schemes, grabbing money from government projects, illegal sand and coal mining and real estate investments. They have developed their down-the-line chain from city to village. The landowner, land mafia, money lender, trader nexus are the controllers of the socio-political life of West Bengal. These social forces introduced Ganesh Chaturthi, Hanuman puja, Tara Ma worship etc. .and has strengthened the Brahminical milieu in West Bengal. These festivals are part and parcel of this local crony capital. They have founded temples in their locality to create their social base. Many TMC leaders, including recent TMC deserter Subhendu Adhikari, has been reported to form huge numbers of Hanuman temples in their constituencies.

The erstwhile BJP had a basis among traders or Baniyas. This newly risen social force also has similar class character to the Baniyas. They are not related to production and that may be a reason to find a pull towards BJP. The corrupt businessmen and TMC leaders when faced with the carrot and stick policy by BJP through CBI-ED and Amit Shah – JP Nadda concert are opting for BJP. In last Panchayat election people had seen that TMC did not allow any opposition member to fight freely in their election. It is true that same thing happened in BJP ruled Tripura but people are aggrieved at this undemocratic activity.

The erstwhile ruling CPI(M) and Left Front partners, though talking loud in all-India forums, are essentially tailing behind Congress. In the name of fighting TMC and BJP, their middle and lower rank cadres in connivance with BJP have voted for BJP in the last Parliamentary election in 2019. They coined the slogan of ‘Ekushe Ram Chhabbishe Bam’ meaning Ram or BJP in 2021 election and Left Front in 2026. This has proved that the social base of the leadership of CPI(M) over thirty four years of their rule has been transformed into a reactionary character.

The socio-economic situation and the reason for the emergence of Brahminical fascists in our country has been dealt by many scholars. They have shown their relationship with crisis of imperialism & Indian state. The same reasoning is true for West Bengal, but West Bengal also has some special reasoning: with a sizeable Muslim population in the state, with a Muslim dominated neighbor country and having a riot ridden history of partition, RSS has been successful in developing a campaign against Muslim ’other’. They have made false propaganda against the population growth of Muslims in Census, their trans-border migration to India, their terrorist activities etc. among common people of West Bengal.

The political forces starting from Congress, CPI(M) to TMC did not fight against this false propaganda. They were afraid of losing Hindu votes. The Brahminical fascists’ campaign reached its height during Shila Pujan, Rath Yatra and demolition of Babri Masjid. No political force starting from CPI(M) to TMC had any alternative socio-economic agend to fight them. That is the reason why we are here today.

There are few left organizations and liberal intellectuals who are propagating the ‘No Vote for BJP’ as the prime slogan to combat the BJP fascists. For the last few years, they were not involved in building any serious united program against BJP. They were busy in discussing how to fight fascism – from below or above? Unfortunately, this call is being welcomed by TMC. The misrule of TMC has created this favorable situation for BJP; therefore, this type of call will be limited amongst its coterie of cadres. Until and unless a united movement is built against BJP’s anti-people policies this type of call for vote will fail to affect common people.

It must be clearly understood that any good will or wish to electorally vote against RSS-BJP clique will definitely fail today unless it combines the day to day burning issues of people. The parliamentary way is not the main form to fight fascism. Anti-fascists have to take control of the streets. The farmers of north India have shown the way. This is the lesson from history as well. It is up to the revolutionary democratic forces to decide which path they are willing to follow.

Dr Amitabha Chakrabarti is a Marxist intellectual and renowned cardio-thoracic surgeon based out of Kolkata. He is also a political activist who has been associated with the Marxist -Leninist movement for the last four decades. 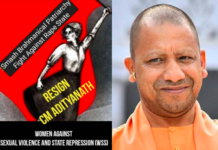 “Those who chant Save the Daughter are saving Rapists”- WSS