There is a huge uproar in the health department of PM Modi´s constituency Varanasi.

All the health officers in the Primary and Community Health Centres of the rural and urban areas of Varanasi have collectively handed over their resignations to the Chief Medical Officer. They have all accused the Collector and the SDM of harassment and torture.

The death of a ‘Corona warrior’ Additional CMO, Dr. Jung Bahadur on August 11th at BHU COVID hospital is behind this collective furore.  After Dr.Bahadur was found to be COVID positive, he was admitted into the Galaxy hospital, where a sample taken two days prior to his death had come back negative. However, in a test that was conducted later, his results came back positive again he was shifted to the BHU COVID hospital in a critical condition and admitted into the ICU, where he passed away.

In their resignation letter to the CMO, the PHC and CHC officers of the district held the state responsible for the death of Dr. Jung Bahadur.

In the letter, the doctors wrote that on August 9, the Assistant Nodal/Deputy Collector had attempted to psychologically pressure all the health officers by threatening them with a lawsuit. In a letter written to the officers on July 23, the CMO had also held them responsible for COVID deaths and asked them to answer for themselves.

The notice sent to them can be seen below:

In this context, the medical officers raised the question of who is responsible for Dr. Jung Bahadur’s death, since the state had also threatened to dismiss him, the shock of which could have killed him.

A total of 28 officers acknowledged that they are resigning due to psychological pressure, and they have written that they will continue to do their medical duties according to the CMO’s orders.

Reports also suggest that there was a lot of interference and negligence in handing over the Deputy CMO’s dead body to his family from the BHU mortuary. In respect to this, the Medical Superintendent of the Sir Sundarlal Hospital, Dr. S.K. Mathur said,

“The tragic death of a patient occurred in the early morning on August 12. He was suffering from COVID and died while being treated. Next to him, a senior patient of COVID was brought to the ICU in a dead state. After completing all the procedures at various stations, both the dead bodies were kept in body bags and placed in the mortuary in an identical manner. We have come to know that the kin of one of the patients was given the other patient’s dead body. The second patient’s family on seeing the dead body realised that it does not belong to their patient. Orders have been given for a committee to inspect this incident and examine all the facts and circumstances of the case. After this, suitable action will be taken in this case as per rules.

This article was translated into English by Damayanti Saha. The original article in hindi was first published in Junputh. 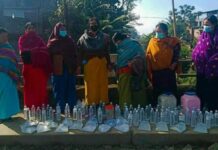 Prohibition, A Public Policy Disaster in Manipur: How and Why Adani Ports to be Removed from S&P Index Due to Business...