Udupi, Karnataka: The controversy surrounding the ban on wearing hijab to a college in Karnataka has reached court with Muslim girl filing a petition before the Karnataka High Court, arguing that the college is discriminating against her and other female Muslim students by denying them entry on the sole ground of them wearing a hijab.

Since December 31st, six Muslim women have been prevented from attending classes because they have chosen to wear a headscarf in college.

The college has been adamant on not letting the women enter the classes. Its been over a month.

The petitioner have argued that wearing a headscarf is an essential practice of Islam and denying Muslim students entry to college for wearing hijab violates their fundamental right to practice religion under Article 25.

The petitioner alleged that Government PU College, located in Udupi, stopped her and other female Muslim students from attending classes on the ground that they wear a hijab (headscarf). The college has continued to deny them entry to their premises and classes, the plea stated.

The petitioner contended that the freedom of conscience and the right to religion are both guaranteed by the Constitution.

Despite that, the petitioner and other girl students were singled out arbitrarily for belonging to the Islamic faith, thus denying them access to the college and the right to education, the petition said.

Further, the manner in which they were ousted created a stigma against them among her batch mates, affecting their mental health as well as their future prospects, it was submitted.

Specifically on the aspect of hijab, the plea claimed that it is an essential part of Islam and enjoys protection under Article 25(1) of the Constitution which confers the right freely to profess, practise and propagate religion.

Article 25 protects the said dress code, which does not offend public order, morality, or health. By singling out the petitioner merely on account of her clothes, she has been denied of her right to education and is being subject to unreasonable restrictions against constitutional morality, it was claimed.

To add fire to the controversy, Karnataka MLA Raghupati Bhat spoke to journalists and said that students who are protesting and seeking permission to wear hijab in classrooms have been told to come to the college campus only if they decide to shun the hijab.

#Udupi #hijab row: MlA Raghupati Bhat-We met parents of the girls & told them- if you have decided that you will not wear hijab inside classroom.Then only you come to the college. Otherwise,don't come here and vitiate the atmosphere. Media or any orgns would not be allowed inside pic.twitter.com/4rFX1QHQ5d

“Otherwise, we have clearly told them not to come to the college and spoil the academic environment,” he said. Meanwhile, the students have moved a petition to the High Court over this matter.

Raghupathi Bhat, speaking to reporters after holding a meeting at the Government Girls Pre-University College in Udupi, stated: “A meeting has been conveyed with the parents, lecturers and School Development and Management Committee regarding the controversy. The students who wanted to wear hijab with uniform were also called… four of them along with their parents participated.” 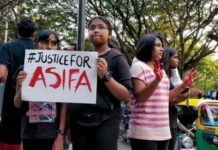