Days after the Alphabet Workers Union (AWU) was announced, Google has been accused of monitoring emails of workers for ‘disruptive language’.

According to The Telegraph, employees in charge of managing ‘internal discussion groups’ were to go through a training process, through which they will learn how to ‘moderate’ emails among employees. Emails that come across as ‘sensitive’, ‘disruptive’ or ‘controversial’ will be flagged and brought to the attention of the company. Google in addition has announced to its employees that all facilities including discussion rooms, emails, etc are strictly for company-related and work purposes only.

These developments took place only days after the AWU was announced. In a piece written by the elected leaders of the union, Parul Koul and Chewy Shaw detail how Google and Alphabet continue to crack down on any voice raised in criticism of the companies and their policies. They went on to criticise the power dynamics within the company by saying, “For a handful of wealthy executives, this discrimination and unethical working environment are working as intended, at the cost of workers with less institutional power, especially Black, brown, queer, trans, disabled, and female workers.”

Google’s monitoring of emails caught attention when AI ethics Co-head, Tinnit Gebru was terminated by the company on account of ‘disruptive’ email she had sent to an internal company group titled, Google Brain Women and Allies. She later received an email from a senior manager, the contents of which informed her of her termination along with extremely vague reasons for the same.

The email was shared by Gebru to Business Insider, and states as follows:“Thanks for making your conditions clear. We cannot agree to #1 and #2 as you are requesting. We respect your decision to leave Google as a result, and we are accepting your resignation.However, we believe the end of your employment should happen faster than your email reflects because certain aspects of the email you sent last night to non-management employees in the brain group reflect behaviour that is inconsistent with the expectations of a Google manager.As a result, we are accepting your resignation immediately, effective today. We will send your final paycheck to your address in Workday. When you return from your vacation, PeopleOps will reach out to you to coordinate the return of Google devices and assets.”

According to Spokesperson Raine Serrano, the AWU saw a large number of sign-ups after Gebru’s termination. Gebru is a well-known figure in AI, with a number of other tech names coming in her support after the event. She founded the organisation Black in AI, a collective to encourage more Black people to enter into the field of artificial intelligence.

The news of Google’s attempts to monitor employee emails has come around at the time of the growing unionisation and formal announcement of the AWU. In our previous piece, we have talked about the anti-union and anti-labour security policies of not just Google but the larger tech landscape as well. Usage of surveillance techniques to crack down on employees is nothing new for the company, with many employees being terminated after protests against sexual harassment policies taking place last year. This is simply yet another means to halt any form of unionisation whereby meeting places are made strictly for work, private emails are flagged for non-work related content, such that collectivisation and collective criticism is blocked.

SC: Power to Identify Backward Castes not in the Hands of... 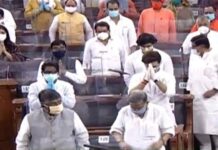