Dalit Labour rights activist Nodeep Kaur was granted bail by the Punjab and Haryana High Court on Friday in an attempt to murder case and is likely to be released.  She was arrested on January 12. Along with the bail plea, the court had also taken suo motu cognisance of her alleged illegal detention.

Kaur, 24, is charged in three cases, including an attempt to murder and extortion. She has already been granted bail in the other two cases.

In her bail plea, Kaur, a member of the Mazdoor Adhikar Sangathan, had claimed she was physically assaulted in police as well as judicial custody after her arrest by the Sonipat police in January. She also claimed her medical examination was not conducted, in violation of Section 54 of the Criminal Procedure Code. Kaur is lodged in Karnal jail in Haryana.

Submitting that she has been targeted and falsely implicated in the matter as she was successful in generating massive support in favour of the Farmers’ movement, Dalit Labour Activist Nodeep Kaur had claimed in her Bail plea (filed before the Punjab & Haryana High Court) that she was beaten, tortured and suffered multiple injuries.

In court, the Haryana Police had denied the allegations, saying Kaur had not raised any such matter either in front of the medical officer or the chief judicial magistrate (CJM).

Senior Advocate RS Cheema contended that she is not a flight risk and that Bail is Rule, Jail is an Exception. It may be noted that she had already obtained bail in two cases registered against her, and in the third FIR, she has been granted Bail today.

The labour rights activist was arrested on January 12, 2021, under a number of charges including rioting while armed with a deadly weapon, unlawful assembly, causing hurt to a public servant, assault and criminal force, trespass, extortion, snatching, criminal intimidation, and lastly the Section 307, attempt to murder.

Many people including US lawyer Meena Harris, actor Diljit Dosanjh, actress Swara Bhaskar and several human rights activists have called for the release of Nodeep Kaur.

Hampi Kannada University is again in headlines for wrong reasons 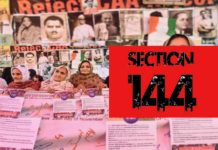