The House Armed Services Committee held a marathon session on Wednesday to approve an increase in the military spending under the annual National Defense Authorization Act (NDAA).

Lawmakers from both parties joined ranks to challenge President Joe Biden’s decision to keep the Pentagon budget at $715 billion for next year, which would maintain it at the same level as the previous year. Due to the bipartisan move, an extra $23.9 billion was approved to go into weapons procurement, research and other areas.

The original proposal was introduced by Rep. Mike Rogers of Alabama, the ranking Republican member on the committee, who welcomed the passage of his proposal as a snub to Biden from his own party.

Fourteen Democrats voted alongside with the Republican lawmakers on Rogers’ amendment, securing passage by a vote of 42-17. The supporters from the Democrat ranks represent districts that rely on military spending or have served in the military themselves.

US occupation and role in toppling governments world over is not unknown. 20 years of endless wars and military fatigue has left the nation bankrupt and increased the social and economic inequalities. Amid this, the calls to end the military industrial complex and the political funding nexus are also getting louder.

Half a million more may flee Afghanistan in coming months: UNHCR

Win without War, an advocacy group called out the committee’s Democrats and Republicans who voted for the amendment while also thanking those who spoke out and voted against it.

“Today, the House Armed Services Committee voted to put arms dealer profits before the needs of everyday people,” Win Without War senior Washington director Erica Fein said Wednesday. “Let’s not mince words: Every congressperson who voted for this should be ashamed.”

Shameful. Every congressperson listed below just voted to put arms dealer profits before the needs of everyday people and boost the bloated Pentagon budget by $37 billion. pic.twitter.com/ULsWDIqO7V

The House markup session took place just after the U.S. Afghanistan mission was formally ended this week. The pullout left over $6 billion in unspent funds in Pentagon coffers, which were allocated previously for the now-disbanded Afghan Security Forces. Those included some $600 million left unspent since FY2020, $2.3 billion from the current year and $3.3 billion requested for FY2022 and approved in June.

That call was echoed by members of the women-led anti-war group CodePink.

“A day after the United States withdrew from one of the most costly wars in history, the absolute LAST thing congressional representatives should be doing is increasing the Pentagon budget,” said CodePink national co-director Carley Towne in a statement.

“Add to that the fact that we’re facing Covid, an ongoing climate catastrophe, and a struggling economy and it’s clearer than ever that we cannot allow our representatives to continue this costly and destructive forever war paradigm,” Towne said. “We need to slash the Pentagon budget and invest in what will truly make us safe: healthcare, a Green New Deal, and public housing.”

“After wasting over $2 trillion on the Afghan fiasco, the House Armed Services Committee just voted to give the Pentagon $25 billion MORE than the enormous 2022 Pentagon budget Biden had asked for,” she said. “Talk about corruption! Look no further than our Congress!” 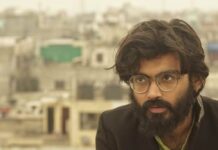 ABOUT US
Gauri lankesh news is an independent news website, pro- people and committed to constitutional values. We bring you not just the news, but truth and change with it.
Contact us: [email protected]m
© Designed By : StandardTouch
MORE STORIES