The Narendra Modi-Shah led central government and some mainstream media houses had ruled that the ongoing farmers’ movement was instigated by the pro-Khalistan organisations and is restricted to Punjab. This theory of the ruling dispensation was challenged by a delegation of 150 farmers’ organisations, activists and youth from the Southern Indian states. This delegation from Karnataka, Andhra Pradesh, Telangana and Tamil Nadu reached Delhi today and marched in support of thousands of farmers protesting at the Tikri border of Delhi.

The protesting farmers are demanding the withdrawal of the three infamous farm laws and for the legalisation of Minimum Support Price (MSP). As of today, farmers have been protesting at the borders for ninety-one days. Sixty activists with Karnataka Janashakti, forty and thirty activists part of several organisations from Andhra Pradesh and Telangana respectively and Ten from Tamil Nadu, marched at Tikri border today in solidarity with the protesting farmers.

The delegates raised slogans against the farm laws and hailing the ongoing farmers’ movement. They also criticised the central government for passing the anti farmers laws.

Mallige Sirimane, General Secretary of Karnataka Janashakti speaking at Tikri said, ‘we are here from all the five southern states to join hands with your protest. We are here to counter the narrative that is being propagated. We are here to show that this movement is not only of the farmers from Punjab and Harayana; it is not a movement of people of a particular religion or of Khalistanis or of urban naxals. We are here to tell that these are lies that are being manufactured. This is a national movement and we are here to say this to the government. Country’s farmers and workers are united and have been united and will remain united. We would continue to fight till the government withdraws the anti-farmers’ laws and passes a law guaranteeing the Minimum Support Price.’

Varadarajendra of the workers’ organisation also spoke and said that the farmers, workers and dalit organisations had come together in Karnataka and have been protesting since the month of August. They also had given a call for a Karnataka bandh, which was successful. He said, ‘the godi media is not covering these protests.’ Varadarajendra further observed that the Bharatiya Janata Party Government of Karnataka led by B S Yeddyurappa has brought in amendments to the APMC Act through an ordinance and is all set to implement the centre’s farm laws. He said, ‘with Samyukta Kisan Morcha giving a call for the movement, we have been consistently protesting since November. We also successfully carried out a tractor rally on January 26, 2021. This is a movement of both farmers and workers and we would fight till we win.’

Tamil Nadu Govt to bear the Cost of Covid-19 Treatment in Private... 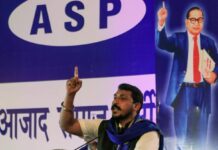 Why is RSS-BJP, Keen on Undoing Historic Wrongs, Silent on Buddhist...