She was arrested on January 12. Along with the bail plea, the court had also taken suo motu cognisance of her alleged illegal detention.

Nodeep Kaur briefly interacted with the media upon her release. Upon her release, she thanked everyone who raised their voice for her release. She also asked people who raise voice for Shiv Kumar, fellow labour activist who was also arrested along with her. Shiv Kumar comes from a poor Dalit family and is in jail for the last 42 days. He was also tortured in jail and he has poor eyesight.

When asked about farmers’ protests, Nodeep said- ‘Everyone must speak for farmers. No one enjoys sitting on roads. Help them in getting Farm Laws repealed so that they can go back home. I have earlier also supported and spoken against farm laws and I will continue to do that’.

Nodeep Kaur released from jail. Kudos to everyone who brought this issue to notice of activists and everyone who helped legally. @amaanbali you also did great. pic.twitter.com/NsgUkuuTWM

Nodeep Kaur had claimed in her Bail plea (filed before the Punjab & Haryana High Court) that she was beaten, tortured, and suffered multiple injuries.

The labour rights activist was arrested on January 12, 2021, under a number of charges including rioting while armed with a deadly weapon, unlawful assembly, causing hurt to a public servant, assault and criminal force, trespass, extortion, snatching, criminal intimidation, and lastly the Section 307, attempt to murder.

Many people including US lawyer Meena Harris, actor Diljit Dosanjh, actress Swara Bhaskar and several human rights activists have called for the release of Nodeep Kaur.

Modi Govt. Responsible for the Plight of Indian Students in Ukraine:... 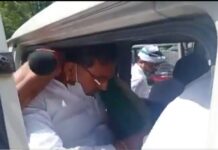