Medical professionals associated with both Ayurveda and Allopathy have raised questions about the efficacy of Coronil, owned by the Patanjali group of Yoga practitioner and businessman Ramdev, in the treatment of COVID19.

Ramdev too has been in the news throughout the length of the COVID19 pandemic in the country-western mostly for peddling lies about Coronil where he called it a cure for COVID19 and that it was authorised by WHO, both claims were later on debunked by the respective authorities.

The Indian Medical Association had recently written to the Uttarakhand government asking them to not add Coronil in the COVID19 treatment kit and that the action would result in contempt of court on the account of ‘mixopathy’.

Adding to the apprehensions around the product which the IMA has clarified neither qualifies as a drug nor a medicine but simply a food supplement, the distribution of Coronil for the treatment of COVID19 has been put on halt in Nepal, The Hindu reported.

In an order passed by Nepal’s Department of Ayurveda and Alternative Medicines, the use of the Coronil kits that Ramdev’s Patanjali had gifted the country was stopped. The order mentioned that “proper procedures were not followed while procuring the 1,500 kits of Coronil.” It further explains that nasal kits and tablets are not “not equivalent to medicines to defeat Covid-19 virus” and went on to cite the issues of efficacy highlight by IMA regarding Coronil.

Even when the Indian states continue to use the kits in the face of detailed medical critique of the Patanjali manufactured kits, Nepal becomes the second country after the kingdom of Bhutan to ban the use of the kits in its country.

The consignment of the banned Coronil kits was received during the tenure of the previous health minister of Nepal, Hridyesh Tripathi, and Juli Mahato, the minister in charge of women and child development. Even though the Patanjali group a big manufacturing unit in the country, the latest order is being thought of as a step by the Oli government to distance itself from the group which operates closely with Ms. Mahato’s brother who is a known businessman.

After the Coup in Conakry: How Guinea’s Army and State grew together 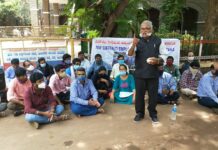