The article is part of our series on migration.

History of NRC in Assam

The National Citizens Registry (NRC) was the result of movements to ensure the dominance of the Assamese community in Assam. In the colonial period, Assam was a source of tea, an important crop for the British Empire. The movement for Assam came in the 1930s when there was a wave of linguistic movements across the country. Demands for redistricting were felt in many parts of British India, and many British territories were reorganized on linguistic lines. For example, the Kannada speaking southern part of the Bombay Presidency became Karnataka, and the Eastern part of Bengal Presidency became Assam.

In Assam, many tea leaf pickers came from the Sylhet region now in Bangladesh, but the migration has been gradual and long-standing. The people there spoke a distinct language that resembled Bengali. For administrative purposes, Sylhet was part of Assam. During the independence struggle, there were some parties that wanted an independent Assam nation. When the decision was made to either join India or the primarily Bengali East Pakistan, there were parties who felt that the Sylhet region could shift the balance towards Pakistan. Assamese nationalist groups insisted on a partition so that the Muslim majority Sylhet district would join Pakistan, and Assam would join India.

Of course, the citizenship of the labouring population was not clear as they migrated between areas under the two new countries. To add to the confusion, many Hindu Bengalis migrated to Assam from East Pakistan at the time of partition.

Assam was crossed between the identity of a modern multicultural state and a guardian of Assamese culture. Assam is home to many ethnic groups apart from Assamese and Bengali with complicated dynamics. Interference from the London before 1947 and Delhi after have exacerbated this. This problem was compounded during the Bangladesh war of independence, which saw many Bangladeshis fleeing to Assam as refugees. The ambiguity of the status of the refugees and those that were not part of Assamese culture led to a struggle by the Assamese.

In the late 1970s, there were movements by Assam nationalist groups to demand control over immigration into Assam, which formed the basis of the NRC, which laid policies ensuring that anyone who came at the time of the Bangladesh Independence war or after would be treated as a foreigner, and not be included as voters. These movements also included amnesty provisions for people who migrated in before 1971.

The bogey of illegal immigration has been sweeping the world from the late 1980s. In 1992, the Congress government implemented “Operation Push back” to deport Bangladeshis, which began when 132 people from New Delhi were determined to be Bangladeshis and were handed over to the Border Security Forces on the Bangladesh border. This operation faced criticism for its inhuman treatment of a vulnerable population, both nationally and internationally, and was suspended. The BJP government has continued to mobilise by claiming that India has been under siege by a growing Muslim population that seeks to overtake the Hindu population by numbers through a combination of having “large numbers of children”, and immigration.

There has been some struggle in using the NRC exclusively against Muslims, and many local Assam groups have insisted that it be applied to Bengalis across religion. On 18th September 2019, Home Minister Amit Shah at a public event announced that NRC will be implemented across the country. Since then, BJP leaders in the states which are facing assembly elections in the coming months have started the NRC bogey. 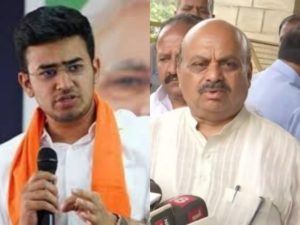 In July 2019, BJP MP, Tejaswi Surya asked in Lok Sabha that Centre extend the National Register of Citizens to Karnataka claiming that a significant population of undocumented Bangladeshi immigrants had been living in Karnataka, especially in Bengaluru. Now 2 days ago, on 3rd October, Union Home minister Basvaraj Bommai said that Karnataka is considering to implement NRC in the state. He also told the press that the detention center has already been built and the government is collecting data on NRC.

Karnataka has been a laboratory of Hindutva hate since the 1990s. Unlike other states, Karnataka’s popular movements are not as suspicious of a hegemonic Indian state and do not have a solid resistance to Hindutva. Like with Assam, Karnataka is home to many ethnic and linguistic groups. Karnataka became the first and only state in the South to be run by the BJP and has not successfully resisted the BJP. If the experiment works in Karnataka, it can be repeated in other states and become a tool by the BJP.

The BJP has been having difficulty dealing with resistance to cultural hegemony from non-Hindi parts of the country, and Karnataka is an area where they can test using citizenship as a way to police the Muslim population. Different parts of the state have Muslims with different histories. Initially, it may look like they are targeting Muslims who are migrant labourers, and later, they can expand their policy to cover other groups as well.

How is the Home Monster allowed to speak like this? Is it not against the constitution to tell refugees that only the Muslims among them will be forced to leave India by the govt? What is going on? These are the seeds of ethnic cleansing being sown in the open for all to see! https://t.co/YQSPV0Oj0s

According to the Indian constitution, one cannot be granted citizenship on the basis of religion. These unconstitutional statements from BJP leaders only fan the communal and Islamophobic sentiments across the country.

Is Karnataka also staring at a similar fate?

Rise of Hindutva forces in Bengal