On 6th June 2018, Mahesh Raut, a land and adivasi rights activist, was arrested in relation to the Elgar Parishad case through the draconian Unlawful Activities (Prevention) Act. The police charged Mahesh just as he was filing a petition to protect citizens whose lands are mined against their will. Members of Socialist Party (India) recently released a petition seeking signatories in support of Mahesh in the name of freedom of speech.

Mahesh Raut was born in Lakhapur village in Maharashtra’s Vidharba region and migrated to Gadchiroli in his childhood. In 2009 he joined TISS and after his masters became a Prime Minister’s Rural Development fellow. During those years, he worked on forest rights and other issues impacting Adivasis in eastern Maharashtra, especially related to exploitation by contractors and corporates. Raut, a central convener and committee member of the Visthapan Virodhi Jan Vikas Andolan (VVJVA)

“He has been one of the best performing Prime Minister’s Rural Development Fellows (PMRDFs) who served in Gadchiroli district for two years in close coordination with the district administration. Raids on his house and detention had become very common for him in last few months because of his tireless work with Bharat Jan Andolan, an organisation started by late B.D Sharma (IAS).”

The petition explains that , “Mahesh was forced out of action so that any residual impedance against daylight robbery by big mining companies could be removed.” At the time, Mahesh Raut was about to file a judicial petition against corporate mining in the Surajgarh mining in Gadchiroli. Adivasis in the area opposed mining as it was a heritage site and legalities did not permit mining there. However, according to the PESA Act, Gramsabhas had rights over forests.

“Mahesh was about to use the judicial system to file a petition to help our fellow citizens from having their lands mined against their will. Our government, however, does not like the judicial system to be used when it is against their corporate overlords. There are now half a dozen corporate mining giants ravaging the natural environment of the region. How much of the Rs 4745 crores [1] of the taxed revenue from mining companies in Gadchiroli in 2019-20 would you think is being transferred to the locals? Would you have guessed that their per capita monthly 2017-18 income was a mere Rs 7144 [2]? Mahesh was simply fighting for a more equitable economy. It is no surprise that after his arrest 300 gram sabhas passed a resolution [3] in his support.

The police filed a 20,000 page chargesheet against Mahesh. They dusted off their SOP which was to throw at him everything they could think of – Sections 121, 124A, 153, 121A, 117 and 120B of the Indian Penal Code (Section 124A, “sedition”, a British era archaism, is a perennial authoritarian government move. But Mahesh is on hallowed ground here with the likes of Tilak [4], Gandhi [5] and others [6]). They have kept him jailed under UAPA – one of India’s several notoriously lawless laws [7] and the government’s favourite go-to bogeyman.”

Mahesh Raut is the youngest involved in the Bhima Koregaon case and was 31 when he was arrested and spent the last two years in jail. Due to his efforts in driving social change, at a young age he developed swollen liver and digestive issues in the form of acute ulcerative colitis. His medical condition puts in a precarious position in prison, especially during a pandemic. His family is also being punished unfairly as they are grounded in Maharashtra. We urge our readers to support the campaign towards bringing justice for Mahesh.

Related: The Trial of Chicago 7 or the ‘trial of Bhima Koregaon and North-East Delhi Riots’? 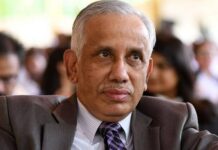 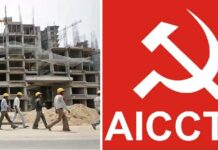 Govt. pays 15.6 Cr to Pvt. Hospitals out of Construction Workers’... 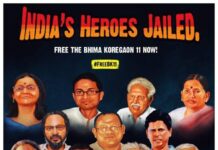