On 17th February 2020, just a week before the North-East Delhi Riots began, Umar Khalid, a former student of JNU, asked people during a public program in Amravati “to come out on streets in large numbers and protests when US President Donald Trump arrives in India”. These lines, spoken in the context of anti-CAA/NRC/NPR protests, later became one of the basis upon which he was arrested by the Delhi Police ‘conspiring’ the East Delhi Riots.  Over the last few months, we have seen Delhi police arresting students, sending a notice to filmmakers and civil society activists who have a long history behind them of promoting peace and harmony in society.

Several activists, critics, and journalists have pointed out that the charge sheets filed by the Delhi Police seem like a script for Bollywood. So how a movie would look like if the charge sheets and ‘story’ written by the Delhi Police in the North-East Delhi riots were made into a feature film? The answer probably lies in a Netflix film released last week titled ‘The trial of Chicago 7’ written and directed by Aaron Sorkin with an ensemble cast that features Mark Rylance, Eddie Redmayne, Daniel Flaherty, Sacha Baron Cohen, Joseph Gordon-Levitt, John Carroll Lynch among others.

‘The trial of Chicago 7’, is a historical courtroom drama based on the actual event and real-life characters situated in the late 1960s and early 70’s i.e. the counter-culture era of the United States and is based on the (in) famous trial of seven anti-war activists (and one Black Panther leader, whose name was later dropped) who protested against United States war in Vietnam and campaigned for ending the war.

At the centre of the movie is a ‘conspiracy theory’ pushed by the Government of the United States. Famously known as the ‘Chicago Seven’, a group of anti-war activists who belonged to three different groups (Students for a Democratic Society, Youth International Party, popularly known as ‘Yippies’ and the National Mobilization Committee to End the War in Vietnam) are charged with the conspiracy of crossing state lines with the intention of inciting riots at the 1968 Democratic National convention.  The trial took place in the backdrop of a year mired with civil unrest, political turbulence, riots, and the assassination of two prominent public figures, namely the civil rights activist Martin Luther King Jr. and Presidential candidate Robert F Kennedy.

In a trial which went for months and narrated in 130 minutes, amid the slogans of “The whole world is watching”, we can see how statements are twisted, turned and quoted out of the context, how judges use their discretionary power of ‘contempt’, how police engage in unrestrained, indiscriminate and excessive violence, how racist and cultural biases comes into play, how few trials are politically motivated and how a vindictive State and Government misuses laws and acts in total disregard of constitutional values.

The seven activists are put on trial despite no evidence being found against them in an investigation conducted under the administration during which riots took place. Instead as per the Justice Department report, “it was the Chicago Police which had started the riots”! Characterized as “vulgar, anti-establishment, anti-social, unpragmatic, petulant, dangerous” and ‘threat to national security’ the seven ‘rebels without jobs’ are charged under the Rap Brown Laws which, according to Federal prosecutor Richard Schulz (played by Joseph Gordon-Levitt), was “created by southern whites…to limit the free speech of Black activists and civil rights activist”.

The co-founder of the Black Panthers party, Bobby Seal (played by Yahya Abdul-Mateen II), who was not a part of the Chicago Seven group and had spent only four hours in Chicago on the day of the riot was only included in the group to make it look ‘scarier’ was literally gagged when he kept demanding that his trial should not proceed without the presence of his lawyer.

There is a scene in the movie where policemen can be seen taking off their badges before beginning ‘crowd control’. There are a bunch of US Nationalists who keep throwing misogynist statements at a girl carrying the US Flag and later tear her clothes and try to rape her and there are political and social elites, completely oblivious to what was going around them.

This movie which finds a perfect resonance with the present-day United States shows us how things have changed very little in the last 50 years in the worlds’ oldest and most powerful ‘democracy’. But that is not it. The movie also shows us how similar things are happening in our own country.

A part of Tom Hayden’s (played by Eddie Redmayne) speech: “If blood is gonna flow then let it flow all over the city”, is presented as “giving instruction to his people to take to the streets”. This part of the speech was cited as evidence without considering what he meant to say and that he had campaigned to “End the war”! Now compare the presentation of Hayden’s speech by Federal prosecutors with that of Umar Khalid mentioned at the beginning of this short piece which the Delhi Police and entire Hindutva machinery propagated as ‘call for violence! Umar’s Khalid speech where he says “won’t response hate with hate” and evokes Gandhi is not only ignored but discarded completely.

Similarly, the repeated requests by the protest organizers to grant them permission for protest and warning about police confrontation is presented by the federal prosecutors as ‘call for violence’. Compare this with the messages in the WhatsApp group i.e. Delhi Protest Supporters Group which are at the centre of Delhi Police’s conspiracy theory. The discussion by group members discussing the rationale of blocking roads has been presented by the Delhi police as “Roadblock and plan of inciting violence”. Similarly the Delhi Police on the basis of a message by filmmaker Rahul Roy in the group which reads: “Besides the warning about possible violence that this regime may want to spark, we need to come up with some ideas on what people can do. If peaceful and yet assertive response ideas are on the table then the chances of violence will reduce…”, termed him a ‘remote supervisor’.

At one place Abbie Hoffman (played by Sacha Baron Cohen) the founder of Youth International Party says: “We’re Not Going To Jail Because Of What We Did. We’re Going To Jail Because Of Who We Are!” This line holds even for those who are accused in the Bhima Koregan Case and the East Delhi Riots. They are being hunted not for what they did, but for who they are i.e. people who envision and are fighting for a democratic, egalitarian and hate-free society.

The movie shows how body-bags of soldiers can be used by the Government and political parties to raise the clarion call of ‘Patriotism and Nationalism’  to serve their interests, while those demanding peace and thereby wanting to stop unfortunate deaths, be termed as ‘threat to national security’ and ‘unpatriotic’!

All the Chicago 7, were not found guilty of conspiracy, 2 were acquitted completely, while rest 5 were convicted under the Rap Brown Law and sentenced for 5 years in prison with a fine of 5000 Dollars. Also, the 5 convicts and their lawyers were charged with several counts of ‘contempt’ of court. After almost two and a half years all the convictions were reversed, but only after the anti-war and peace activists had already served almost half of their wrongful sentences.

‘The Trial of Chicago 7’ is a movie that forcefully introduces us to the reality of cross-cultural and cross-national similarities about the nature of ‘State and Government’. States and Governments react in similar ways and follow similar procedures against those who demand accountability and question its legitimacy. States’ and Governments’ when threatened with ideas and movements of justice, peace, and equality, move to delegitimize and criminalize them and by doing so turns upon its own citizens with an utmost vengeance.

The writer is pursuing a Ph.D. in Sociology from Jawaharlal University, Delhi. Views are personal. 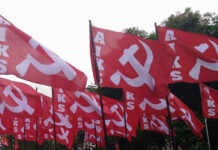