Karnataka congress says that Chief Minister BS Yeddyurappa in the BJP core committee meeting has accepted that he and Amit Shah were directly responsible for the collapse of the coalition government in Karnataka.

Opposition leader Siddaramaiah with other congress leaders had visited the governor and briefed him about the issue. They also gave a complaint saying “Actions of BJP leaders have killed democracy through an anti-constitutional conspiracy called Operation Lotus.

Several Congress leaders, including Dinesh Gundurao, MB Patil and VS Ugrappa were present.

Siddaramaiah has announced on Facebook that he has met with the honorable governor and party leaders, and has demanded governor to recommend the president to dismiss the state BJP government involved in “Operation Lotus” and taking action against Union Home Minister Amit Shah.

In the leaked video, Yeddyurappa is saying that Amit Shah oversaw the whole exercise of keeping the 17 MLA who resigned in Mumbai for one and a half months.

Also read: NDA setback in Maharashtra and Haryana Polls is Sigh of relief for Yeddyurappa 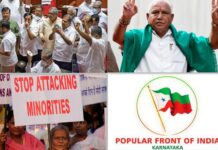 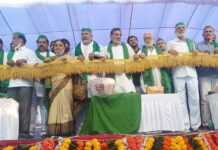