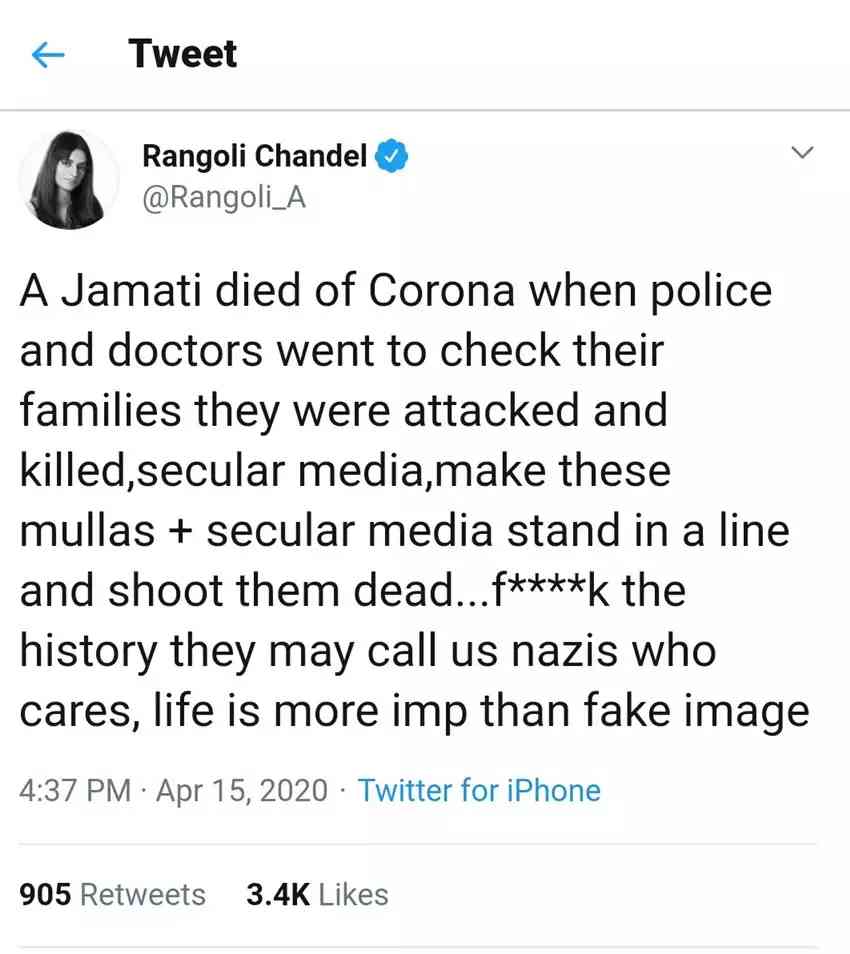 Swati Chaturvedi, Kubra Sait, Reema Kagti, Farah Khan among others have spoken out against this.

Thank you @Twitter @TwitterIndia @jack for suspending this account. I reported this because she targeted a specific community and called for them to be shot along with liberal media and compared herself to the Nazis. 🙏🙏🙏 . pic.twitter.com/lJ3u6btyOm

I’ve blocked Rangoli and reported her to twitter.
But @MumbaiPolice @CMOMaharashtra @OfficeofUT This kind of hate mongering is irresponsible. Please look into it, and take necessary actions. https://t.co/WywccuZvKR

@MumbaiPolice. Could you please look into this and take action? Isn’t this spreading fake news AND inciting hatred & violence against certain people?@OfficeofUT @AUThackeray https://t.co/tKCqS5CZgN

Thank you @Twitter @TwitterIndia @jack for suspending this account. I reported this because she targeted a specific community and called for them to be shot along with liberal media and compared herself to the Nazis. 🙏🙏🙏 . pic.twitter.com/lJ3u6btyOm

Soon after her account was suspended, she shared an official statement saying

“Twitter is an American platform absolutely biased and anti-India, you can make fun of Hindu Gods call Prime Minister and Home Minister terrorists but if you say anything about people pelting stones on health workers and Police forces they suspend your account, I have no desire of empowering any such platforms with my perspective and honest opinions, so I am not reviving my account. I was my sister’s spokesperson now watch out for her direct interviews, she is a huge star she has many ways of reaching out, a biased platform can be easily avoided.”

Rangoli Chandel and her sister actress Kangana Ranaut are known for their love and support for Narendra Modi and his government.

She regularly tweets praising everything that BJP and PM Modi´s does.

She had tweeted, when the BJP government won the elections in 2019 “Today no party, no individual won, today is that historic day when India won. We are very fortunate to have a leader like @narendramodi ji in our times, this is the beginning of a new era, time to break free and regain our lost glory…. Bharat Mata ki Jai ….Jai Hind” and her sister Kangana Ranaut had made tea and pakodas in celebration of Modi’s win. Kangana Ranaut has also said she is a big fan of Modi.

Both the sisters are quite vocal on social as well as public platforms in not just her support but in vilifying any kind of opposition against him. She also regularly calls for critics of BJP and whom she deems “anti-national”.

Rangoli Chandel who claims to be managing her sister Kangana Ranaut twitter handle is not new to controversies. She has taken to attacking people who do not appreciate her sister Kangana´s movies as well as BJP. Sometimes its difficult to differentiate if she is Kangana spokesperson or part of BJP IT troll team.

Earlier this week, she called for suspending the 2024 Lok Sabha election given the economic crisis India is facing during the pandemic and let Modiji be the PM without elections. She calls this idea `revolutionary´ There are many who have supported her Islamophobic and calling for genocide tweets but these people are themselves supporters of Muslim genocide.

There are others who support her right to freedom of speech and also since she is an acid attack survivor one should let her voice her opinions.

Nizamuddin Markaz controversy has only exposed our bigotry and Media´s blatant...

SC on Farmer Protests:Will not interfere with Farmers protests

Karnataka BJP President: No Migrant died of starvation during lockdown