Delhi Police has imposed Section 144 at Shaheen Bagh, the site of anti-Citizenship Amendment Act protests, mainly by women, in Delhi.

The police deployment has come after the right-wing group, Hindu Sena, gave a call to clear the Shaheen Bagh road on March 1. However on Saturday, with the reported intervention of the police, they called off their proposed protest against the anti-CAA agitation.

Joint Commissioner DC Srivastava at Delhi’s Shaheen Bagh told ANI, “As a precautionary measure, there is heavy police deployment. Our aim is to maintain law and order and prevent any untoward incident from occurring.”

Section 144 (which prohibits assembly of five or more people) has been imposed in Shaheen Bagh on Sunday, 1 March, a day after right-wing group Hindu Sena took back their call to “clear the protest site”.

In a statement on Saturday, the Hindu Sena said that police pressured them to call off their peaceful protest on Sunday. It also claimed that their national president Vishnu Gupta had been “illegally detained” by the police.

Twelve companies, including two of female forces, have been deployed in Shaheen Bagh, 100 men each from four police districts have also been deployed along with the local police, the official said.

“People are informed that Section 144 of CRCP has been imposed at Shaheen Bagh and it is requested that permission for any gathering is not allowed. Violation of this may invite legal proceedings,” said the Delhi Police directive.

A large number of people, mainly women, have been holding a sit-in protest in Shaheen Bagh, near Jamia Millia Islamia since mid-December last year in protest against the Citizenship Amendment Act (CAA), National Population Register (NPR) and the National Register of Citizens (NRC).

Many areas in North East Delhi are still tense over the riots that started last Sunday. At least 42 people have been killed and over 200 injured in the violence that gripped the city.

SKM to hold Tractor March in All Districts on Republic Day 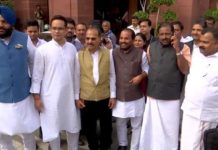