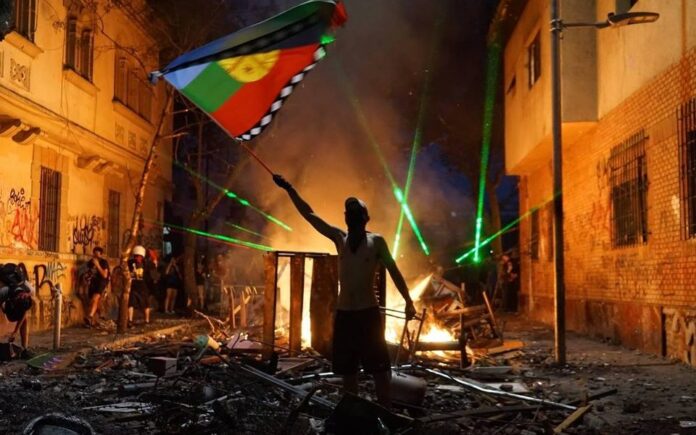 A week before Chileans vote in a referendum to replace their constitution, and on the anniversary of the 2019 protests which led to this move, mass demonstrations were held at the Plaza Italia. While the demonstrations in the morning were celebratory, the atmosphere shifted towards the evening with vandalism, looting and violence.

Churches and police stations were set ablaze. While firefighters were able to control most of these, the small Church of the Assumption, known as the “artists’ parish,” dating back to 1876 was destroyed. Mayor Daniel Jadue of the Communist Party of Chile was also hounded out by some protestors.

The Minister of the Interior and Security Víctor Perez stated this was coming from a minority of protesters.

This was significantly different from the morning when demonstrators, who were wearing masks, held up banners, sang and danced. Police also pulled back from the Plaza Italia gradually.

A 43 year old demonstrator, Viviana Donoso told AFP “It’s great, very good and positive…The people of Chile need to unite, and we have to believe that we can do things.”

Demonstrators called for their countrymen to approve the proposed change of the constitution. On October 25th, Chileans will vote to approve or reject the creation of a new constitution. Their current constitution was created by dictator Pinochet and completely sidelines public interests. Pinochet’s regime set an example for neoliberalism across the world with strong authoritarian governments adopting market-led policies and his Constitution reflected these ideals. When Pinochet conceived it, it gave excessive power to the military and safeguarded the interests of corporates. Though changes made in 2005 did provide some public control of the military, with lifetime senate seats being removed for top brass, but the key framework remained.

Related: The first 9/11: How the Parliamentary Path to Socialism in Chile was Crushed

Last year, protests broke out initially as a response to hike in metro fares in Santiago, but eventually turned into a demonstration against inequality and the Government favouring corporate interests. They demanded rights and safeguards for Indigenous people, higher pay, gender equity, pension reform, access to affordable public transportation, free public education and quality medical care and access to healthcare. One of the key demands was also the setting up of a new constitution as protestors hope that it will help them achieve these goals.

On one of the nights, police headquarters and a dozen metro stations were set ablaze, bus stops smashed, buildings vandalised and supermarkets looted. The protestors were angered because of police’s continued use of excessive force as they had been using tear gas, water canons and rubber bullets to attack the protestors. More than 30 people lost their lives during these demonstrations.

At the height of the protests in October, Chile pulled out of hosting two major international summits, the COP25 climate summit and the Apec trade forum.

The protests eventually waned with the COVID-19 pandemic, and the Government, headed by Chile’s billionaire businessman president Sebastià Piñera, used the pandemic to counter major political change. The pandemic was used for heavy repression and to muzzle the opposition. Police officers have been using brutal force as a few weeks ago a policeman pushed a teenager off a bridge during a protest. This use of brutal force created widespread anger, and likely affected the violent turn that the protests took.

The primary target of the protests held now is Piñera. Currently, levels of inequality is similar to that of Pinochet’s dictatorial regime, and during the pandemic, he showed how out-of-touch he was with the lives of majority Chileans. There were limited health services, and the pandemic ravaged through crowded, working class neighbourhoods. Citizens did not have alternative shelter, and many were homeless. The deadly outbreak killed 13,600 Chileans, and more than 490,000 were infected.

While General Pinochet’s military coup on September 11th, 1970 is considered to be the beginning of global neo-liberal era political scientists hope that the vote to convene a constitutional assembly in Chile might set a new example for democracies across the world. Chileans hope that the new document will bring leadership closer to and accountable to the people by bringing in formal mechanisms for citizen consultation and referendums and decentralisation. Political scientist Michael Albertus suggests that it could lead to greater rights for labor unions, establish health care and education as fundamental rights, guarantee equality for women, and grant greater autonomy to Indigenous groups.

India Stands United With the Protesting Farmers: Chakka Jam Across the...