Chhattisgarh chief minister Bhupesh Baghel’s father, Nand Kumar Baghel, was on Tuesday sent to 15-day judicial custody by a local court in Raipur for allegedly making derogatory remarks against the Brahmin community, superintendent of police Prashant Agarwal said. Agarwal said he was produced in a court and sent to jail.

The 86-year-old Nand Kumar Baghel was booked last week for allegedly saying that Brahmins should be boycotted.

The complaint was filed by the Sarv Brahmin against him at DD Nagar Police Station in Raipur. In the complaint, the community alleged that Nand Kumar Baghel described Brahmins as “outsiders (foreigners) who should either reform or get ready to go to Volga from Ganga.” The comments were made during an event in Agra, Uttar Pradesh.

According to officials, a case for promoting enmity between different groups was registered against the CM’s father.

“A case was registered under Indian Penal Code Sections 153-A (promoting enmity between different groups on grounds of religion, race, place of birth, residence, language) and 505(1)(b) (with intent to cause, or likely to cause, fear or alarm to the public, or to any section of public whereby any person may be induced to commit an offence against the state or against public tranquillity) against Nand Kumar Baghel (86),” Ajay Yadav, a senior police official, said on Saturday.

On being asked for his comment, Chief Minister Bhupesh Baghel reportedly said,

“I respect my father as a son, but as a Chief Minister, none of his mistakes, which are going to disturb public order, can be ignored. No one is above the law in our government, even if he is the Chief Minister’s father.”

After presented before Court, Nand Kumar refused to get bail. He said he had not said anything wrong and he still sticks to his statements. “I will fight for the social justice for SC, ST and OBC till death. Therefore there is no question to bend before injustice.” Nand Kumar Baghel said.

A Memorial dedicated to the martyrs of Farmers Movement at Singhu:...

Jharkhand Govt to Provide Vaccines to Everyone Aged Above 18 for... 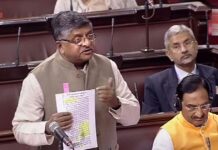