“If SLA is implemented, BSNL Contract Workers will lose all rights”

On 30th September, the newly formed contract workers union observed a “Black Day” and held protests against BSNL’s austerity measures and the Service Level Agreement (SLA). They will also be holding hunger strikes in the upcoming weeks seeking payment of dues, regularisation and the continuation of the Job Contract Labours system.

The contract workers began working under the Kolkata Telecommunications Department 25 years ago, five years before Bharat Sanchar Nigam Limited (BSNL) was even established. At the time, the worked under a “casual system”.

In 2002, a digital notification was put forward which allowed workers to be hired as contract labour. Based on this, a high power committee was created to determine contract work, and in 2004, the “Job Contract” scheme came into place, which regulated the employment of contract workers employed as Job Contract Labours (JCL).

Though JCL prohibits it, contract workers are often hired to do perennial work- such as creating bills, working as a peon, line man helper, etc. Officially, they are hired as sweepers, watchmen, etc, but their managers make them do this work covertly. In doing so, they’re able to increase profits making contract workers do the same jobs as permanent workers (differentiated as “employees”) but for lesser pay and without statutory benefits. JCL workers are also often not paid for months.

For this reason, contract workers have been demanding regularisation and consistent pay by invoking the 1970 labour laws and 1972 gratuity act:

However, austerity measures that came into place in 2019 to combat BSNL’s economic crisis made this difficult. Contract workers could only work for 13 days in a month, as opposed to 26, and those above the age of 55 were removed. For those who couldn’t work for 13 days, such as sweepers, work hours were reduced to 3 hours/day. As their working hours were halved, their continuity of service was interrupted.

This effected their pay as well, which was cut down from an average of 16,000 to 8,000. However, the cut was only in theory as most workers hadn’t been paid in a year. The union brought these issues to the Calcutta high court, and in August 2020 an order was issued for the workers to be paid in 5 weeks. However, this was only for 13 days, and not 26. 12 workers had also committed suicide by that point. As of September 2020, more than 50,000 workers across the country still need to be paid.

Why are workers protesting SLA?

Even as workers are going through a crisis due to lack of payment and the COVID-19 pandemic, the BSNL management introduced a new notification called the Service Level Agreement. In this, contracts would be given out to bidders, and contract workers would be massively retrenched through outsourcing.

Despite the mistreatment of JCL workers by the Management, the introduction of the new SLA poses an even greater threat to their rights. The Job Contract Scheme prioritised the worker’s rights. Under JCL, even when contractors changed, the contract workers could work at the same place. It detailed the rights of contract workers, had institutionalised anti-discrimination policies and provided job security and stability.

However, SLA prioritises the service itself, and workers are obligated to their contractors, and not to the company or jurisdiction. If BSNL feels that their work is not satisfactory according to pre-set parameters, contracts can be terminated. Under this new system, workers will have to leave along with the contractors, and BSNL would be absolved of all legal or labour issues related to workers.

At the moment, there are 5000 workers in the Kolkata Communications District. Such a system- which prioritises profits rather than workers rights- puts them at a greater risk of not being paid as well as losing their work despite 25 years of service. As workers can be shifted at any time, it also makes it difficult for them to organise against the management in case of mistreatment since they wouldn’t be as familiar with workers or management, and for the fear of losing work. Combined with austerity measures, SLA also makes regularisation of contract workers impossible.

Demands of the Contract Workers Union

Older unions that were registered under right and left parties, including TNC and CPIM, are apparently compromised in favour of the Management. Therefore, shortly before the first lockdown, a new union was formed for Contract Worker’s rights. Sure enough, despite pushback from contract workers, union leaders as well as employees unions signed a formal agreement in support of austerity measures as well as scrapping JCL.

Amitava critiqued the management for introducing these measure during COVID time arguing it is a cruel tactic to avoid worker’s dissent. Many BSNL workers had contracted coronavirus as they had to work through the lockdown, and had not been paid for over a year. Though they will be made more vulnerable through these new measures, mobilisation could be more risky and difficult because of their current situation.

Nevertheless, thousands of workers are already protesting because of the severity of the issue. “While workers are also fighting for non-payment of dues their main fight is against SLA under which workers will lose all rights” explains Amitava. They assert that negotiations on regularisation of workers should be done on the basis of JCL. For this purpose, the workers observed a black day on September 30th, and will be conducting a continuous hunger strike  from October 15-17. They will continue these protests after the Durga Puja festival. 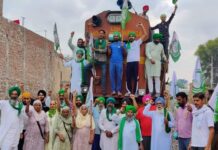