A Bengaluru Court on Friday granted bail to actor Chetan Kumar in relation to a case filed against him for tweeting against Justice Krishna Dixit of the Karnataka High Court, who is part of the Bench hearing the hijab case. Bail was granted subject to furnishing personal bond of ₹1 lakh and two sureties of the same amount.

The order was passed by the Additional Chief Metropolitan Magistrate.

Sources said that the police had advised the public not to make provocative statements about the hijab hearing. The police took notice of Kumar’s tweet dated February 16 where he questioned Justice Dixit of the High Court.

The tweet said that Justice Dixit, who had made disturbing comments in a rape case, is now determining whether hijabs are acceptable in government schools, and questioned whether he has the clarity to do so.

” This is a tweet i wrote nearly two years ago regarding a Karnataka high Court decision. Justice Krishna Dixit made such disturbing comments in a rape case. Now this same judge is determining whether Hijabs are acceptable or not in government schools. Does he have the clarity required? “.

In that case, the judge had granted bail to a rape accused after noting that the victim’s explanation that she was tired and had fallen asleep after the sexual assault is “unbecoming of an Indian woman; that is not the way our women react when they are ravished.”

Following a huge public outcry, the remarks were later expunged from the order.

Kumar was booked under Section 505(2) [intent to incite a class or community to commit offence against another class or community] and Section 504 [intentionally insulting, thereby giving provocation to any person to break public peace] of the Indian Penal Code for posting the tweet.

UN Special Rapporteur’s letter to the GOI on farm laws and...

Rise of Hindutva Forces in Telangana: Communal politics and lack of... 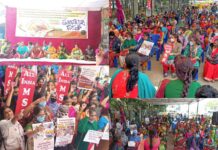