18th March marks the 118th day of the farmers’ movement and the Delhi police have resorted to more barricading around the protest sites.

Samyukt Kisan Morcha spokespersons have condemned this illegal and irrational act of Delhi Police. SKM also demands that the police remove such barricading including on internal roads so that the life of locals can be kept easier and their livelihoods protected.

Many different kinds of progressive mass organisations and associations participated in a planning meeting organised by Samyukt Kisan Morcha at Singhu Border today, to make its Bandh call on 26th March successful. Trade unions from the organised and unorganized sectors, traders and arhtiya associations, workers’ unions including agricultural workers unions, transporter associations, teachers’ associations, youth and students associations and others took part in the meeting. All participants pledged their full support to the bandh, and thanked the Samyukt Kisan Morcha for the historical inspiring struggle being led by it. Several organisations also committed to mobilising thousands of people into the protest sites, at a time when the protesting farmers would have to attend to wheat harvesting operations in a couple of weeks’ time.

A “Shaheed Yadgar Kisan Mazdoor Padyatra” will be organised between 18th and 23rd March. Preparations are underway for people from Haryana, Uttar Pradesh and Punjab to join the Shaheed Diwas events marking the martyrdom of Bhagat Singh, Rajguru and Sukhdev on 23rd March, after walking by foot. One Padayatra will start on 18th March from Lal Sadak Hansi in Hisar, Haryana and will reach Tikri Border. A second one will start from Khatkar Kalan village and pass through Panipat before reaching Singhu Border. A third padayatra will get initiated in Mathura before it reaches Palwal.

The 400-km padayatra underway in Karnataka is moving forward with good participation in villages along the route. After completing the Yatra in Bellari on March 23rd, the soil being collected from the villages en route will be brought to Singhu Border on April 6th. Here, a memorial is being planned for the martyrs of the movement.

Why Labour Code Bills are more Dangerous than the Farm Bills?

‘Modi coins new adjectives to malign all dissent in this country’:... 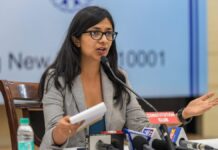