On 25 July 1943 in Italy, amidst the Second World War, Italian dictator Benito Mussolini was voted out of power by his own Grand Council and was arrested.

This marked the end of 21 years of fascist rule under Il Duce (‘the Leader’) Mussolini.

Rise of Fascism in Italy

“Those who cannot remember the past are condemned to repeat it”-George Santayana. These words of the writer, philosopher, and poet Santayana not only make a good quote but as there is a rise of fascistic tendencies across the world a daily reminder of how ignorant we are to history.

It is in this context that we see the rise and fall of fascism in Italy.

The outbreak of the first world war had resulted in a surge of Italian nationalism and the war was supported by a variety of political factions. Benito Mussolini who started his career as a journalist and was a socialist saw this as an opportunity for his own ambitions.

While still associated with the socialist party, his writings indicate he rejected egalitarianism and believed in Nietzsche’s concept of übermensch. He was ousted of socialist party for his support for military intervention.

In 1917 Mussolini got his start in politics with the help of a £100 weekly wage (the equivalent of £6000 as of 2009) from the British security service MI5, to keep anti-war protestors at home and to publish pro-war propaganda.

In 1918, after serving in the First World War, Mussolini returned to Italy and openly began advocating the need for a dictator to lead the country. He charismatically argued that Italy needed “a man who is ruthless and energetic” to take control of the economic and political crises the country faced. He brought various fascist groups together to form his National Fascist Party (Fasci di Combattimento). The party soon began to gain popularity.

On 24 October 1922, at a rally of over 40,000 Fascists in Naples, Mussolini issued an ultimatum to King Emanuele III: “Either the government will be given to us, or we will seize it by marching on Rome”. Threatened by the prospect of Fascists from all over the country descending upon Rome, the King sent a telegram to Mussolini, inviting him to form the government. Through rigged elections in 1924, and the dismantling of all constitutional and democratic institutions, Mussolini established himself as the dictator of Italy. In addition to building a police state, he also focused on creating propaganda to retain his popular support.

During his regime, propaganda was used to build a personality cult around Mussolini. He portrayed himself as a macho strongman who excelled at everything from sports to music. Having worked as a journalist himself, Mussolini knew the power of words; thus, free speech was deeply controlled and censored by his party. A free press, trade unions, and political opposition parties were crushed and a network of spies and police was deployed to track any form of dissent among the public.

However, Mussolini’s reckless military adventurism and his unchecked ambition to expand Italy’s territories led to the fall of his regime. Between 1935 and 1943, Mussolini led Italy into war “in Ethiopia, Spain, Albania, North Africa, the Mediterranean Sea, France, Greece”, and more! By 1943, when he was ousted out of power, Mussolini’s regime “was stretched far beyond its means”.

On 24th July 1943, the Grand Council of the fascist regime gathered to discuss the position of Italy, which had suffered multiple military set-backs by then. Mussolini was old, ill (diagnosed with gastritis and duodenitis) and losing control over his government. One member of the Council, Dino Grandi, contended that it was the dictatorship that had brought the country close to military disaster and allowed ‘incompetent’ people to rise to positions of power. By then, the Allies had invaded Sicily and bombed Rome. The regime had also lost legitimacy in the eyes of a vast majority of the population. In these circumstances, the Grand Council passed a vote of “no confidence” on Mussolini’s leadership and decided to effect a transfer of power.

Mussolini was too weak, physically and mentally, to resist or oppose this decision. After a short, formal meeting with King Victor Emanuele III, Mussolini was arrested by the police who had been waiting for a reason to remove him. Thereafter, he was placed under house arrest on the island of Ponza. When the Italian public heard the news of his arrest, they were relieved to finally see the end of his fascist regime. Cheerful crowds celebrated his arrest by defiguring images of the fascist dictator.

A few months after Mussolini was voted out of power in July 1943, Nazi paratroopers rescued him from house arrest and prevented him from being turned over to the Allies. Hitler installed him as the puppet leader of Nazi-occupied territory in northern Italy, called the Italian Social Republic (a.k.a. the Republic of Salo).

In April 1945, when Mussolini found out that the Nazis were negotiating a surrender with the Allies, he attempted to flee to Switzerland with his girlfriend, Clara Petacci. However, both of them were captured and shot dead by Italian partisans (who were anti-fascist guerrilla fighters).

Their bodies were dumped unceremoniously in Milan’s public square, Piazzale Loreto. This carried symbolic meaning for anti-fascist forces in Italy; eight months earlier, fascists had displayed the bodies of 15 Italian partisans in the same square. When passers-by came upon Mussolini’s body, they threw vegetables at it, kicked it, spit on it, and one woman even emptied a pistol into his body to express her anger at the dictatorship. The bodies of Mussolini and his fellow fascists were hung upside-down at the square. Interestingly, some believe that this news of the public defilement of Mussolini’s corpse led Hitler to commit suicide two days later and have his body burned discretely, so as to avoid a similar fate.

In the words of Paolo Monelli, writer and journalist-

“The silence of the summer night is broken by songs, screams, clamors. A group exited by Caffè Aragno climbs up Via del Tritone screaming with a crazy explosion: ‘Citizens, wake up, they arrested Mussolini, Mussolini to death, down with Fascism!’

It sounded like the scream of a mute who gets his voice back after twenty years. Windows illuminate violently, front doors burst open, houses empty, all are out embracing each other, telling each other the news, with those simple and exuberant gestures belonging to people overwhelmed by emotion.”

As the Italian intellectual, Ranuccio Bianchi Bandinelli, wrote in his diary at the time: “Behind the façade there was nothing. The first actor took his large cardboard head off and his idiot servants could be sent home with a cuff”.

Read Next: The Rise of COVID-19 in Times of Fascism: Timeline and The Path Ahead 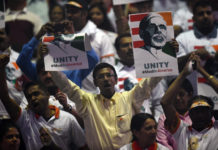