The Parliament before every session provides a list of government businesses expected to taken up to inform both the opposition as well as people of the republic of their agenda.

In this list for the Monsoon session, the DNA Technology (Use and Application) Regulation Bill, 2019 was enlisted for consideration and passing in the Lok Sabha. This Bill was introduced in its current form in August 2019 in Lok Sabha. Thereafter, it was referred to the Parliamentary Standing Committee in October 2019 which submitted its report in February of this year. Remarkably, two members of the Standing Committee (Shri Asaduddin Owaisi, M.P, Lok Sabha & Shri Binoy Viswam, M.P, Rajya Sabha) submitted dissent notes articulating the loop holes of the Bill that the Standing committee failed to address.

The stated objective of the Bill is to regulate the use of DNA to identify victims, offenders, suspects, undertrials, missing persons and unknown deceased persons. The category of “suspect” is neither defined  by the bill nor by the Indian legal system. This ambiguity in the very meaning of “suspects” allows for an arbitrariness of the State giving it a free hand to collect the DNA of anyone the State thinks is suspect. There is no end to who all can be suspects and without a definition anyone under the sun, can be considered one.

Apart from this all-encompassing definition of suspects, the all-encompassing nature of this Bill can be understood from the list of matters for which DNA collection/regulation/storage can be used for: 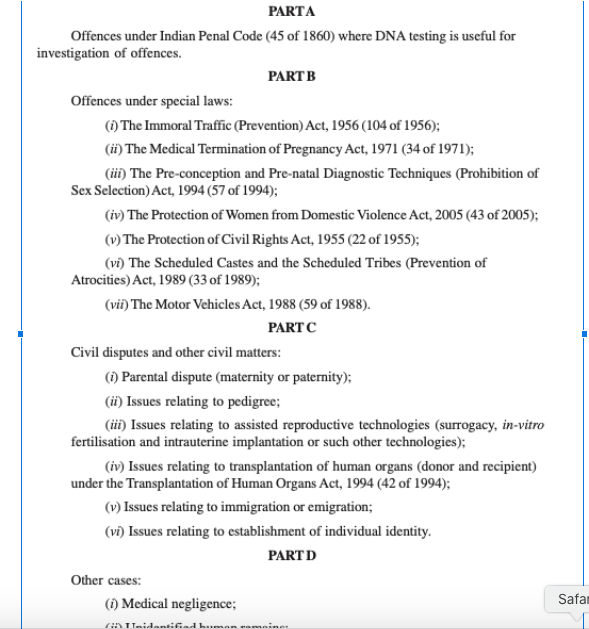 As is evident, DNA testing, collection, storage is not limited to only to criminal matters. It extends to a wide array of matters that even experts on DNA, are unable to tell us how DNA will be useful in these matters, such as Immoral Trafficking Act, Pre-natal Diagnostics Act, Motor Vehicles Act, medical negligence, issues related to assisted reproductive technology.

Regardless of civil, criminal or any other matters that the DNA is collected for, the bills imagines multiple indices, as follows:

These indices are to profile each individual whose DNA they collect and store it on the National DNA Data Bank/Regional Data Bank. While this data is to be maintained by the previously mentioned Data Banks setup by the Bill, it also requires Private Testing Labs to maintain information records of the tests run and submit it to the National/Regional Data Bank. There is no time period specified for how long data that is profiling individual identities in these indices can be stored. In effect, a database with our DNA, our names, our identities revealed is sought to be made as a timeless database without a personal data protection framework in place.

The bill has a “conditional consent” clause for the DNA being collected for the database. According to this clause, for offences with sentences of less than 7 years an individual can refuse to give their DNA.  But for offences with sentences more than 7 years even if consent is refused, the magistrate can order collection of DNA from you. This compulsion to give our give our DNA’s to go into a database where it can likely stay forever is an attack on our dignity. You and I after our DNA’s are collected and stored in the database will have no recourse to get it removed from there. And we will have no knowledge of the way our DNA’s will be used. Since there is no clause that limits the usage of the DNA. There is even a possibility that this Database will be connected to Aadhar given the States obsession with it.

DNA as we see is a personal health information that the State has set out on a mission to collect and store. The DNA bill by design is for profiling individuals. It is a concerted attack on the fundamental right to privacy which covers at least three aspects – (i) intrusion with an individual’s physical body, (ii) informational privacy, and (iii) privacy of choice. All three aspects of privacy have been completely ignored by the DNA Bill.

With the data breaches of Air India, Big Basket and Dominoes that resulted in the exposure of even the government officials email id and passwords, such collection of person health data without stringent protections of the DNA Data itself must be seen as a National security threat. The State does have not have the ability to protect this data.

The current criminal justice system does make use of finger print testing and DNA testing. The Statement of objects of bills identifies the some of the challenges of using DNA for trials, such as delay, need for experts to interpret the DNA evidence, and yet the Bill fails to address these very challenges that it cited as one of the reasons for this Bill. In UK, despite collection of DNA they have failed to establish any reduction of crime rates because of the use of DNA Technology. Such a database does not help solve crime, increase the efficiency of prosecution as is abundantly evident from UK. Even with this knowledge, the State spending 20 Crore as one time cost and 5 crore as recurring cost of the public money is neither required nor in our best interest as the people. On the pretext of improving the criminal justice system by regulating DNA technology, the State is attempting to pass another legislation to profile and target individuals for political means. There is absolutely no compelling necessity of the state to make such an extensive database of DNA’s.

The DNA Bill is drowning in vagueness, setting out to make a database of our DNA that renders us vulnerable to targeting and must be opposed.

Delhi: FIR Against Trade unions and ASHA workers for Protesting on...