The list of 40 journalists whose phones were kept under surveillance between 2017-2019 using Pegasus software created by an Israeli Surveillance Company called NSO Group, includes the name of a Jharkhand based independent journalist Rupesh Kumar Singh also. Among the big names of Delhi journalists, Rupesh stands out as he reports from a small town and is not associated with any big news channel or has exposed cases on any big leader.

Rupesh writes on issues of ‘Jal, jungle and Zameen’ ( land, water and forest rights) and of state atrocities against Adivasis. That is also the reason, he is an eyesore for the state and central government.

Rupesh has written for Gauri Lankesh News also on several occasions. His reports are detailed and evidence based and have helped many organisations in raising pertinent issues of Adivasi Rights.

We talk to Rupesh about the spying and why does he think his number is in the list?

Rupesh Kumar Singh: According to the news, the surveillance on me started after his reporting of the murder of an Adivasi daily wage labourer named Motilal Baske on June 9, 2017. Motilal Baske was murdered by CRPF Cobra in Jharkhand’s Giridih district on the pretext of him being a Maoist with a prize on his head.

I had reported on this issue bringing forward the truth that Motilal Baske was not a Maoist but rather a daily wage labourer who along with daily wage labour also ran a small hotel at the Parasnath mountain. My report then was published by web portals like The Wire, Janjwar, Hastkshep, Bhadas for Media and Hindi magazines Dastak and Samyantar.

The adivasi was killed by the administration falsely accusing him of being a Naxalite, and the prize money received after the murder was also distributed. Many names were involved in this including the DGP of Jharkhand at that time and the most important thing about the report was that it disclosed the fraud of Naxal operations.

Later on, a movement against the fake encounter of Motilal Baske was spearheaded by ‘Daman Virodhi Morcha’ a collective formed jointly by Mazdoor Union Samiti of daily wage labourers, Sawanta Susar Baiasi, CPIML (Liberation), Visthapan Virodhi Jan Vikas Aandolan, Jharkhand Mukti Morcha, Jharkhand Vikas Morcha and AJSU Party. The echoes of this movement in the form of its demands were heard from Jharkhand Vidhan Sabha to Rajya Sabha and Lok Sabha.

It was around the same time I began suspicious that my phone is being tapped. Later I was abducted along with my friend Mithlesh Kumar Singh and the driver Mohammad Kalam by the Central IB team on June 4, 2019. I was told by the IB people that my phone was being taped and that is why they knew my location. Later, on June 6 2019, in front of my eyes, they orchestrated our arrest with explosives in Bihar’s Dobi district and I was sent to jail under the ‘black law’ UAPA.

Also Read: Privacy is my constitutional right and this government is guilty of violating it: Seema Azad

Six months of my life were wasted in jail. Efforts from the side of the state were made to tarnish my social identity. Me and my family were under immense mental pressure, and even after coming out of jail, there were indications that the IB was spying on me and even indirect threats were made. All of it is reflective of snooping using the Israeli software.

GLN: In yesterday’s monsoon session there was a lot of commotion on this issue. Do you have any expectations from the government to look into the matter?

RK: Since NSO only sells its spyware to sovereign governments, there is no aversion in saying that the phones were surveilled with the government’s permission. The IT minister who did the press briefing  and assured even his name ended up in the list along with his wife. By evening Rahul Gandhi’s name also came. Prabhat Patel, his wife but 18 of his family member’s numbers were on the list.

GLN:  Do you expect anything from the courts?

RK: In my experience, whenever there is public outrage, opposition and courts have taken it into consideration. Now one sitting SC judge’s name is also being rumoured. Congress leader, Rahul Gandhi, and his close friend circle numbers are in the list. Mamata Banerjee, her nephew’s number is in the list. Normally in Indian system, you never know, there might be some ‘internal setting’ and hush the matter, so if public gets angry then i don’t think they can avoid investigation into the matter.

GLN: How do you see this matter on personal and on the society level?

RK: The govt has attacked our right to privacy. This is absolutely unconstitutional and is an attempt to hijack democracy and even if people don’t wake up now then the time isn’t far when India too will have the fascist regime and dictatorship like that of Hitler, which is RSS agenda of Hindu and Hindustan. I feel the issue of  ‘phone tapping’  is merely the tip of the iceberg.

But I have belief in our people who have been part of many struggles so i know that people will fight against it. This episode should not be tolerated. People should understand this and speak against it.

On a personal level, I feel this is very bad that has happened with me and with others whose phones have been snooped on. My privacy has been completely compromised, who i was talking to on phone, whose photo i clicked, who i am chatting and what i am chatting, so this is completely an attack on my privacy. It is a very serious offence.

So I am worried, but I am not afraid. If you speak the truth, and the government is anti people then it does all kinds of attempts to muzzle you. This has been happening in our country and whosoever is in power has a  history of spying. This govt of Modi-Shah has even spied on his friend’s daughter. So this Gujarat model is being applied all over the country.  And now they are trying to implement it in the whole of India.

I appeal to people that they should understand that this is an attempt of the government to hijack democracy and bring dictatorship in India and they fight against it.

GLN: Will you file any complaint on the govt or NSO for this episode?

RK: I am talking to my lawyer, but a lot of big names have come up in this. I am a small person and do not have much means to go to Delhi and fight the case in Supreme court. But if this is done as a collective of journalists whose names and numbers are in this list, if they fight a case, I will definitely be with them and go to SC.

To the union govt, I clearly want to convey that irrespective of whether they keep my phone on surveillance or imprison me, till my last breath, I will keep writing for the people. 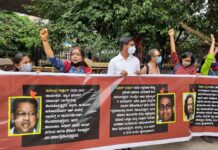