The RSS-BJP government of India, led by a seasoned RSS whole-timer, Narendra Modi, has miserably failed in providing basic amenities, employment, education, security, and peace to 138 crores of Indians (out of which approximately 80% are Hindus). However, last August 5, he had joyous news to share with the people of the country. While laying the foundation of Ram Temple at Ayodhya on August 5, 2020, with the get-up of a prosperous Hindu sage, Prime Minister declared that the centuries of wait of the Hindus of the world was over, as Lord Ram’s birthplace was finally liberated from numerous attempts to destroy it. According to him, with his laying down the foundation of the Temple, India was writing a “glorious chapter” and declared that “Today, the Ram Janmabhoomi [birth-place] has become free from the centuries-old chain of destruction and resurrection”.

As generally happens with our PM, he resorted to lies regarding the destruction of Ram birth-place temple for building Babri Mosque too. According to his narrative, borrowed from the RSS shakhas, Ayodhya represented a continuous war between Hindus and Muslims over the Ram Temple for almost the last five centuries.

While boasting of victory over the adversary (Muslims) he did not bother to look at the epic work of poetry in Avadhi language penned by Goswami Tulsidas, namely, Ramcharitmanas. This was the work that mesmerized India with the story of Lord Ram and the latter became the house-hold deity of every Hindu home.  He penned this work from 1575-76. According to the Hindutva version, Ram’s birth-place temple was destroyed during 1538-1539. Thus the Ramcharitmanas, written almost 37 years after the so-called destruction of Ram birth-place temple should have mentioned this destruction. But it did not.

Are Hindutva zealots trying to say that the greatest story-teller and worshipper of Ram and his Court, Tulsidas, did not speak the truth in his historic work? Is it not an attempt to question the credibility of Goswami Tulsidas? Are the Hindutva zealots trying to say that Goswami Tulsidas kept mum on the issue of the destruction of a temple at Ram’s birth-place due to some ulterior motives?

Contempt of the Supreme Court Judgement

By claiming that the Ram Janmabhoomi “has become free from the centuries-old chain of destruction and resurrection”, the PM was openly contradicting the Supreme Court judgment on Ayodhya delivered on November 9, 2019, which said that the Babri Mosque was not built after demolishing any temple, and the appearance of the idol of Ram Lalla on the intervening night of 22/23 December 1949 was illegal. The judgment said that the demolition of the Babri Masjid in Ayodhya on December 6, 1992, was an “egregious violation of the rule of law”. The same judgment underlined the fact that “Muslims have been wrongly deprived of a mosque which had been constructed well over 450 years ago”. In fact, the PM could be tried for contempt of the Court for his Ayodhya speech.

We saw above how Babri Mosque has been demolished and a grand Ram Temple is coming up on its place relying on a fake narrative. The RSS-BJP government led by PM Modi is committed to undoing the wrongdoings of the past. However, the Indian past looked through the Hindu Muslim binary has its serious limitations. One major problem is that despite India being a five-thousand-year-old civilization, it is only the period 0f approximately 700-800 years in which people with Muslim names ruled/attacked India, that is under scrutiny.

Let us get acquainted what the most important ideologue of the RSS/Hindutva and the second chief of it, MS Golwalkar wrote about the destruction of Somnath Temple in 1025-26 by Mahmud Ghazni. According to him:

“One thousand years back our people invited foreigners to invade us. A similar danger threatens us even today. How the glorious temple of Somnath was desecrated and devastated is a page of history. Mahmud Ghazi had heard of the wealth and splendor of Somnath. He crossed the Khyber Pass and set foot in Bharat to plunder the wealth of Somnath. He had to cross the great desert of Rajasthan. There was a time when he had no food, and no water for his army, and even for himself left to his fate, he would have perished, and the burning sands of Rajasthan would have consumed his bones. But no, Mahmud Ghazi made the local chieftains to believe that Saurashtra had expansionist designs against them. In their folly and pettiness, they believed him. And they joined him. When Mahmud Ghazi launched his assault on the great temple, it was Hindu, the blood of our blood, the flesh of our flesh, the soul of our soul-who stood in the vanguard of his army. Somnath was desecrated with the active help of the Hindus. These are facts of history.”

If the RSS-BJP government is serious about executing its core issue of undoing religious injustice in India’s past then they should start working to hand over Jagannath Temple at Puri to Buddhists immediately. Swami Vivekananda who is regarded as an icon of the Hindutva politics and resurgent Hindu India by RSS, who was also the greatest narrator of ancient India’s past, unambiguously, declared that Jagannath Temple was originally a Buddhist Temple. According to his admission, 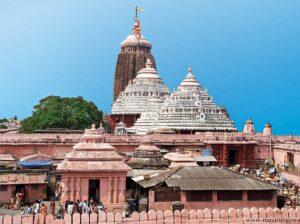 “To any man who knows anything about Indian history…the temple of Jagannath [sic] is an old Buddhistic temple. We took this and others over and re-Hinduised them. We shall have to do many things like that yet. “

It has been corroborated by another darling of the Hindutva camp. According to him, ‘Rath Yatra’, an integral part of Jagganath Temple was a Buddhist ritual too, taken from the original Buddhist temple. Bankim Chandra Chatterjee wrote:

“I am aware that another, and a very reasonable, account of the origin of the festival of Rath [at Jagganath Temple] has been given by General Cunningham in his work on the Bhilsa Topes. He there traces it to a similar festival of the Buddhists, in which the three symbols of the Buddhist faith, Buddha, Dhamma, and Sangha, were drawn in a car in the same fashion, and I believe about the same season as the Rath. It is a fact greatly in support of the theory, that the images of Jagannath, Balaram, and Subhadra, which now figure in the Rath, are near copies of the representations of Buddha, Dhamma, and Sangha, and appear to have been modeled upon them.”

The Buddhist Temple at Puri was not the only one Hinduised. Founder of Arya Samaj, Swami Dayanand Saraswati while describing the heroics of Shankaracharya in Satyarth Prakash, wrote:

“For ten years he toured all over the country, refuted Jainism and advocated the Vedic religion. All the broken images that are nowadays dug out of the earth were broken in the time of Shankar, whilst those that are found whole here and there under the ground had been buried by the Jainis for fear of their being broken (by those who had renounced Jainism).”

The Buddhist Temple at Puri is an important reminder, that the Hindutva rulers who declare their love for indigenous religions like Buddhism and Jainism should begin to handover their usurped temples and Vihars at the earliest to them.

Supreme Court on ‘Tandav’:There should be screening of programs on OTT platforms

Questions and Concerns Regarding the Covid 19 Vaccine Roll-out

ABOUT US
Gauri lankesh news is an independent news website, pro- people and committed to constitutional values. We bring you not just the news, but truth and change with it.
Contact us: g[email protected]
© Designed By : StandardTouch
MORE STORIES

Fandry: An Unflinching Look at the Enduring System of Caste