The farmers’ historic struggle and victory have upset not merely political arrogance, but conventional wisdom in more than one way. It has shown the limitations of class analysis, and has thrown up new ideas for organizing peaceful protests in a democracy.

The fact that the relatively better off famers from Punjab, Haryana and U.P often led the movement should teach us the lesson that class position is not always the determining factor. When pushed to the wall, dissent spread across all classes in the entire agricultural sector and inequality within agriculture became less important. Conditions were created for a movement based on unprecedented solidarity. We witnessed this as small and marginal farmers, landless agricultural labourers mostly dalits, men and women cutting across caste, gender, religion and region joined the movement. The fact that the better off farmers had greater economic staying power was an advantage. To this was added the nature of agricultural activity. It is different from factory work in so far as men and women could share the agricultural daily work routine. It prepared them for an indefinitely long resistance. In this game of patience the government blinked first; its highhanded arrogance collapsed with several state elections looming large in the background.

It would be wrong to say that the farmers were unaware of the class character of the state and its policies. They took no time to point out that the now-repealed three farm laws were primarily meant to promote the interests of the two biggest business houses in the country, the Ambanis and the Adanis. The role of the government was that of a facilitator for their profit from agriculture. This contrasts starkly against Gandhian vagueness of “Trusteeship’’ of national wealth in the hand of big business.

Superficially the farmers’ movement might look similar to J.P. led movement of ‘total revolution’, or Anna Hazare led ‘’anti-corruption’’ agitation. However, they miss the mark. The ‘total revolution’ reminds one of a French saying , ‘the more you try to embrace, the less you do’. A way of paraphrasing it  is, if a movement spreads too thin across too many issues, it fails to capture any; prioritization of issues is essential for effectiveness. The anti-corruption movement was even hollower. It never made clear the difference between personal and systemic corruption. Consider that the three farm laws were made legal (however dubiously), but it does not negate the fact that they were meant to hollow out our democracy further by making the livelihood of  half of India’s population dependent on the profit motive of two large private business houses. It is less relevant whether Prime Minister Modi is personally corrupt or not. His action was meant to further corrupt our democracy, and that matters more. The farmers did not create any such confusion.

The farmers could rise above the blame game of party politics, and vicious narratives of false nationalism. Instead they forged solidarity of caste and class, and rejected the “Manuvad’ of gender domination. To be effective, they now face the problem of negotiating their demand for MSP with the broader objectives of the society where many different interest groups coexist.

Much of the discussion about providing legal guarantee for the minimum support price (MSP) for agricultural produce, 23 crops in total (7 grains, 5pulses, 7 oilseeds and four cash crop) focused mostly on its role as an income support policy for the farmers.  This is indeed a priority in the backdrop of the distressed conditions of the farmers which have been all too apparent in the large number of farmers’ suicide each year, their mounting debts pointing to the unviability of a situation where the cultivation cost often tends to exceed the selling price, and false promises made by the Prime minister of doubling farmers’ income is a cruel joke. Average farm income is at about Rs1800 per month, about 1/3rd the national average.

If income support to the farmers, especially the small farmers materialize, it would have a tremendous positive external economy, raising demand for industry, especially small and medium scale industries in the unorganized sector. The non-agricultural population stands to gain from it. Through Legal guarantee for MSP, steps need to be taken to make especially small farms viable, and take the wider non-agricultural public along with it. A higher support price to raise farmers’ income might appear incompatible with the national food security policy (NFSP) through an extended public distribution system. It had originated in measures for stabilizing prices of essential commodities against speculation in 1955, and creating adequate storing facilities. The government now spends on an average about 3 lakh crores annually mostly for price stabilization through public distribution without income stabilization policy for farmers. MSP can link the two, price stabilization with income support.

The price of each of the 23 crop has to be set within a band. In general lower price in good and higher price in bad harvest year may be set to limit speculation. Several coarse grains and pulses which are climatically suited for low rain fed areas, may be set at the higher end of the band to induce change in the longer run cropping pattern through relative price incentives.

The Swaminathan Committee’s recommendation as a benchmark for MSP will cost some 17 lakh crores according to the government. This is certainly an overestimate. Taking into account non-traded self-consumption by the farmers which is higher for coarse grains, some 45-50 percent of the production is marketed surplus. The money recovered by sales through the public distribution system is a deduction from the total cost of a minimum support price scheme, and another deduction is stabilization of price through public distribution. Reckoning with all this, most estimates converge in the range of 5 to7 lakh crores. Compare this with DA etc. given to government employees (maximum 5 per cent of the population) which is about 5 lakh crores; all tax breaks and revenue forgone to help a handful of big business, about 4 lakh crores; an unofficial reliable estimate of deliberate default of bank loans is some 10 lakh  crores for 28 borrowers, whose names are known. Interestingly, all of them except one (Vijay Malaya) are from Gujarat.  Does 5-7 lakh crores for 50 percent of India’s population sound too high in view of these facts? Or, is it simply because the farmers did not have a strong enough political voice?

Taking 7- 8 lakh crores of budgetary support needed from the central government with MSP price of each crop fixed  bands, the focus should be making economically viable some 85 percent of farmers with small holdings. Not merely for justice, also the movement will lose momentum without such a focus on solidarity which was at the core of its success.

The focus requires increasing land productivity, not labour productivity. Heavily mechanized agriculture which increases labour productivity enhances the profitability of the employer at the cost of reducing employment, as has happened in organized industry under stagnant demand conditions. What we need instead is higher productivity of land through minor irrigation, innovation in organic fertilizers, water management and climatically suited cropping pattern supported by MSP to be stored and sold in local markets as far as possible. Warehousing facilities have to be decentralized as far as possible as an objective to minimize transport and storage cost. The climate disaster has been accentuated by profit seeking water intensive cropping patterns that are not suited to some areas. It has  undermined food security particularly of the poor in arid areas by discouraging the production of several nutritious drought resistant coarse grains and pulses due to their low market profitability. This has to be reversed.

Second, mounting agricultural debt affects most farmers, but the poorer the farmer, more badly hit he is on this count. Inability to repay debt chokes off institutional sources of credit forcing reliance on private credit which results in a vicious spiral of exorbitant, unrepayable interest burden and informal land grab. Bank credit per acre of operational land holding should be the norm. It is possible to devise schemes that links selling certificate of grains under MPS with provision of bank credit.

Finally, these measures can only work through panchayats and local gram sabhas that must have fiscal right and autonomy, (which is already in the 73rd amendment of the Constitution) to be reviewed and revised every 5 years in the light of performance regarding parameters like, yield, loan repayment, cropping pattern and perhaps also criteria like gender, caste and religious minority participation.

The India farmers struggle organized through Panchayats and Mahapanchyats with little money has been spectacular, almost unbelievably so in recent years. Constitutional provision for greater power to them for organizing the rural economy already exists, and nobody else can do it better. Indeed they alone can do.

Prof. Bhaduri is currently teaching at Pavia University, Italy. He is a visiting professor at the Council for Social Development, Delhi University.

Hindu Mahasabha leader to BJP: We are the ones who killed... 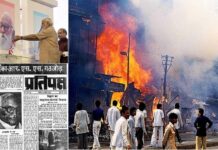 SKM:Support from International Celebs is a matter of Pride