Prime Minister Narendra Modi, in an address to the nation today, announced that the three contentious farm laws will be repealed. This has been the biggest victory of the farmers movement who have been protesting for almost a year at Delhi borders and in different parts of the country.

PM Modi in his address has said- “We haven’t been able to explain to our farmers. This is not a time to blame anyone. I want to tell you that we have taken the farm laws back,” said the Prime Minister, urging farmers to return to their homes and fields.

This has brought a wave of celebration at Delhi borders and farmers all over the country.

In his address, he said for a new framework of MSP a new committee will be constituted that will comprise of farmers, agriculture experts and agriculture economists.

In his address, PM Modi also talked about the various schemes related to farmers.

The decision is welcomed by several political parties and hailed as victory of farmers.

Modi Govt has withdrawn the 3 black #FarmLaws fearing loss in the upcoming elections.

PM Modi should apologise to the families of all those farmers who've lost their lives in the struggle for justice!

My heartfelt congratulations to every single farmer who fought relentlessly and were not fazed by the cruelty with which @BJP4India treated you. This is YOUR VICTORY!

My deepest condolences to everyone who lost their loved ones in this fight.#FarmLaws

Indian farmers have won their movement against the Indian government with regard to three laws enacted last year. They showed huge courage, discipline, patience and determination to see that the movement succeeded. ✊✊#FarmLaws. pic.twitter.com/tpcRGL5prE 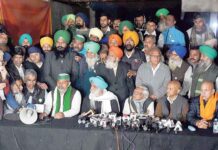