A Delhi court on Monday took cognizance of the charges against former JNU Students’ Union president Kanhaiya Kumar, Umar Khalid, Anirban Bhattacharya and seven others in the 2016 JNU sedition case. The court has summoned the accused on 15 March, two years after the Delhi Police filed a charge sheet and a year after the Arvind Kejriwal government granted prosecution sanctions.

In January 2019, the Delhi Police filed an indictment against Kumar and former JNU students Umar Khalid and Anirban Bhattacharya for allegedly shouting anti-India slogans during a university campus event. The event was organised in protest of the hanging of parliament-attack mastermind Afzal Guru. The event broadly was questioning the of capital punishment in general and the fact the Afzal Guru was not given a fair hearing. Kashmiri students Aquib Hussain, Mujeeb Hussain, Muneeb Hussain, Umar Gul, Rayeea Rassol, Bashir Bhat, and Basharat are the others charged in the case.

Owing to insufficient evidence against them, as many as 36 others, including Communist Party of India (CPI) leader D Raja’s daughter Aprajita, Shehla Rashid (then vice-president of the JNUSU), Rama Naga, Ashutosh Kumar, and Banojyotsna Lahiri were identified in column 12 of the charge sheet.

In February last year, the Delhi government gave the city police the go-ahead to prosecute the accused. According to rules, investigation agencies need the permission of the state government before filing a charge sheet in cases of sedition.

In a different case connected with the 2020 Delhi riots, one of the accused, Khalid, is already in jail under UAPA.

Chief Metropolitan Magistrate (Patiala House Courts) Dr Pankaj Sharma, according to an Indian Express article, took notice of the charge sheet and said,”The Home Department, GNCT [Government of Delhi], has already filed a sanction to prosecute accused persons, dated February 27, 2020. After careful review of the charge sheet and consideration of the material, all accused persons are summoned to face trial, and for March 15, 2021, they have been summoned by the investigation officer.”

On 11 February 2016, a case was registered under Sections 124A and 120B of the IPC against unidentified persons at the police station in Vasant Kunj (North) following complaints by BJP MPs Maheish Girri and Akhil Bharatiya Vidyarthi Parishad (ABVP).

Despite the university administration cancelling permission, the said event took place following a complaint from the ABVP, which had called it “anti-national.”

Police also alleged that Kumar incited the crowd to yell slogans against India.

Also read: Ex-Nigerian Minister to Be the First Woman Director General of WTO

Nearly a year after a city court ordered the AAP government to take a decision within a reasonable time frame, the prosecution penalty was granted and noted that the delay amounted to a breach of the due process of law.

The Delhi government then told the court that in the 2016 incident, the police had filed the charge sheet in a “secret and hasty manner,” without obtaining the competent authority’s approval.

The sanction was finally granted on February, 20 last year by the government of Delhi. Two weeks before the sanction, while campaigning for the Delhi assembly election, Home Minister Amit Shah had said that if the BJP were to be elected to power, “within an hour” of forming the government, it would give prosecution sanctions against Kumar and Khalid.

On February 19, Chief Minister Arvind Kejriwal said he would ask the department concerned to take a “expeditious decision” on the granting of a sanction for prosecuting Kanhaiya and others in the case of sedition.

“Right to choose a partner of choice a fundamental right’- Allahabad... 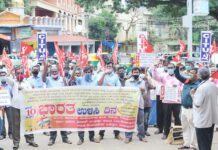 Samyukta Kisan Morcha: No Anti-Social Element will be allowed to Enter...