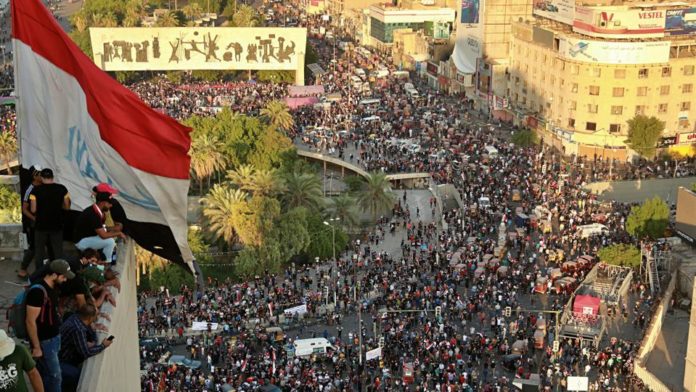 From October 2019, mass protests have erupted in Iraq. The protests have been against the constant foreign interference by both the United States and Iran, the unbearable corruption in the public sector and a failing economy. The state clamped down on the protests by shutting down the internet in most of the country. In some cases violence broke out. Hundreds have been killed in the protests. By the end of November, the Prime Minister, Adil Abdul Mahdi resigned.

These protests are part of a decade long struggle by the people of Iraq to fight the colonization they have experienced for over a century. Since the American invasion of Iraq, people feel the already authoritarian system has become corrupt and stagnant. Iraq also stands between the actions of the USA and Iran.

Since 2014, Shia cleric Muqtada Al-Sadr began to rise as a leader. He is a very popular and charismatic figure in Iraqi. The Sadr family is one of the most influential Shia families in Iraq and has produced many Islamic leaders and scholars. In the 1990s, the family worked against Saddam Hussein’s government, and adopted a strong pro-poor populist. Since the establishment of the current regime, Muqtada Al-Sadr managed to represent the movement, being seen as someone who could both speak to the streets and to the elites.

The global south generally has not had the agency to determine borders, but Iraq maybe one of the most tragic examples of this. They were part of the Ottoman Empire. The Ottoman Empire fell because of cooperation between a budding Arab nationalist movement and the British and French forces in World War I. The Arabs were betrayed when the British and French divided up their winnings after the war, and laid down the countries of Syria and Iraq after. The British joined the provinces of Baghdad, Basra and Mosul to make Iraq. Immediately, struggle began against British rule. The British placed a puppet government when they left, which was latter disposed.

Iraq’s high oil reserves and strategic location placed it in the crossfire of the Cold War. In the 1960s, the Ba’ath party, the product of a secular pan-Arab movement rose to power, and through the party, Saddam Hussein came to power.

Saddam Hussein’s rule of Iraq was plagued by internal and international conflict. War with Iran in the 1980s, war US in the 1990s, uprisings by the Kurdish people, and instability caused by a feeling that the Shia majority could rise in the way they did in Iran, all contributed to a violent, yet delicate balance of power in Iraq, which was being held together in Hussein’s state.

With the invasion of Iraq and the overthrow of Saddam Hussein in 2003, the shaky balance was lost. The Iraqi state was rewritten. The constitution of Iraq was redrawn, and now serves American interests under the language of freedom and democracy. The new Iraqi centre was unable to become a credible power again. The new constitution gave a strong federal structure, which was used by the American forces and companies to work with local governments to settle troops and buy oil, and it left both the Iraqi people and the economy under the control of America. The American War on terror left a huge wave of death and terror in its wake.

In this period, the public sector was also hit hard. Education, electricity sectors, and health were beginning to fail. Decades of conflict and American economic aggression meant Iraq already had difficulty providing for its people. Invasion further destroyed infrastructure. After the global financial crisis in 2008, things only got worse. Corruption was said to have increased. Many Iraqi teachers started giving tuition outside of their class. Local administration became more notably corrupt. For many local Iraqi people, this persistent corruption and the growing inability to access basic infrastructure became a source of discontent.

The government also allocated power along communal lines. Though the constitution prohibited explicit discrimination, the power was distributed in such a way that the Prime Minister would be Shia, the President would be Kurdish, and the Speaker of parliament would be a Sunni Arab. Shia Arabs represent over two-thirds of the country. Sunni Kurds represent about a sixth of the country, and Sunni Arabs. From 2008, the Shia political elites also began to faction.

Iran has been trying to exercise control in the region through the organizing of Al-Hashd Ash-Sha’bi (Popular Mobilization Forces, PMF), which, like Hezbollah in Lebanon, are coordinated groups that work with the Iran government. PMF forces put Iraq in conflict with Israel through the Iran-Israel conflict. ISIS continues to enjoy support, both foreign and domestic in Iraq.

From 2011, mass protests occurred almost every year or two. The original 2011 protests were said to have been inspired by the Tunisian Arab Spring, but the state cracked down on them, as part of the war on terror and the growing threat of ISIS, but the Iraqi people have been regularly coming to the streets for change. The demands of the protesters are met partially at times, though many Iraqis feel these changes do not address the systemic problems that country is facing regarding the public sector and the state’s ability to manage violence in the region.

Last year, protests began, this time inspired by the Yellow vests movement in France. Social media has played an important role in organising.

Protests will continue until the structural problems in the Iraqi public sector are addressed. Iraqi people need secure and affordable education, healthcare, electricity and water.

Protesters know that the problems started in 2003, and the solution would be in a change to the constitution of Iraq. Foreign powers in the United States and Iran have an interest in keeping things the way they are.

Without a fundamental change in the system of governing Iraq, which gives them the ability to determine their own fates, the structural problems will remain. Iraq is held with the chains of its colonial past, which has caused the gridlock it experiences today.

The opinion expressed are those of the author and do not necessarily reflect the official position of Gauri Lankesh News.