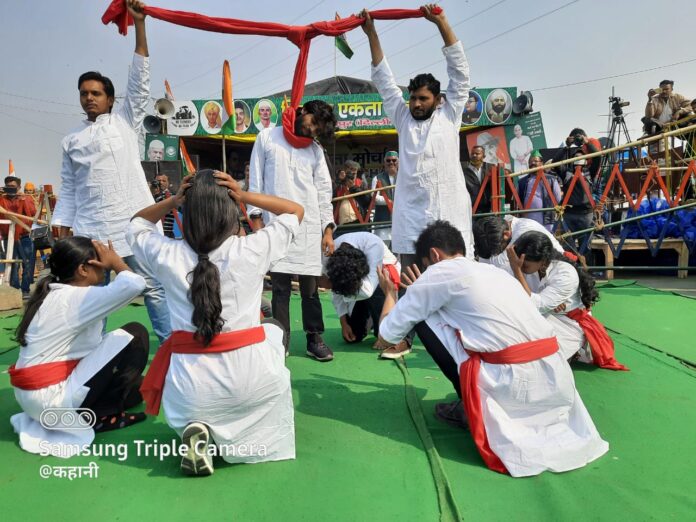 Students who are part of Dastak a cultural platform of Students Federation of India (SFI) in Jawaharlal Nehru University (JNU) joined hands with Hyderabad Central University (HCU) students to perform a street play “Corporate kanoon” at Gazipur border. Farmers are protesting at the borders of Delhi for last 78 Days against three contentious farm laws passed by the Central Government.

Dastak is a cultural forum who believe art forms can be a tool of resistance. The play was directed by Shaik John Basheer a student and theatre activist from the University of Hyderabad.

The play “Corporate kanoon” focuses on the ongoing struggle by organised peasants against the three farm laws unconstitutionally passed by the state. The play tries to send the message that the farmers’ plight is not isolated, but affects the whole population. It presents the historical injustice committed towards farmers that has culminated in more than three lakh farmer suicides across the country.

Also read: 293 Cases of Sedition Against People Who Have Commented on Modi-Yogi So Far

Shaik John Basheer told Gauri Lankesh News that the struggle is not limited to farmers of this country. He said,” If Minimum Selling Price (MSP) system is changed it will affect all the people of this country. Government is supporting corporate houses and not farmers through these laws. We are trying to convey the struggles of farmers through artistic ways. The media is not willing to show the real struggles faced by farmers of our country. Street plays were the popular form of entertainment before all these TV channels came. We are using this play to tell the farmers that they are not alone in this struggle. We, the students of this country are along with them”.

Basheer told that while they were performing the play, there was a part where a farmer is shown hanging himself. During the scene thousands of farmers in the audience raised slogans such as “Kisan Ekta Zindabad” very loudly. “I’m going back to Hyderabad and I will be doing the same play in Telugu along with other students and artists to make the people of Telangana understand the Importance of Farmers’ Struggle”, he told.

Dharna At Delhi Police Headquarters By the Lawyers in Solidarity With...

International Day of Democracy Amidst The Decline of Democratic Pillars