Neeraj Chopra, the 23-year-old Olympic gold medalist on Thursday took to social media and urged people to not distort and misinterpret his comments regarding Pakistan’s javelin thrower Arshad Nadeem during the finals of the quadrennial event to further their propaganda.

“Sports teaches us to be together and united,” the 23-year-old from Panipat said.

In an interview with the Times of India, Chopra had said that right before his turn at the Olympics, he was initially unable to find his javelin because his Pakistani counterpart was moving around with it.

“I was searching for my javelin at the start of the final. I was not able to find it. Suddenly, I saw Arshad Nadeem was moving around with my javelin. Then i told him, ‘Bhai give this javelin to me! I have to throw with it.’ Then he gave it back to me. That’s why you must have seen I took my first throw hurriedly.”

The comments were wrongly interpreted by media houses and Indian social media users who went on to accuse the Pakistani athlete of trying to tamper with Chopra’s javelin.

On Thursday Neeraj Chopra posted a video on social media and clarified that even though players have personal javelins, there is no specific rule about it; anyone can use anyone’s javelin.

“Arshad Nadeem was not tampering with my javelin. He was just practicing for his throw, and nothing else,” Neeraj can be heard saying in the video.

Neeraj Chopra said he is extremely disappointed to see some of the reactions from the public and feels it was blown out of proportion.

I would request everyone to please not use me and my comments as a medium to further your vested interests and propaganda,” said Neeraj.

“I’m extremely disappointed to see some of the reactions from the public on my recent comments,” he said.

The athlete was praised widely after he came forward with his clarification and talked about unity in the face of divisive politics of the Indian media houses and right-wing trolls on the internet.

Neeraj Chopra showed more nationalism in a one tweet than the entire Cricket and Bollywood together in their lifetime.

Had Neeraj Chopra not clarified and called them out, By now RW trolls & websites would have termed it as 'Javelin Jihad'. pic.twitter.com/iqt2kNBstF 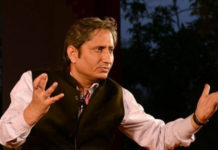 Stop watching news channels if you want to save your inner...