Let us see some of the facts related to this episode

On 18 June 2020, police hauled up Bennicks for violating lockdown timings. Arguments ensued. June 19, Bennick’s father Jayaraj was picked up by police. Son went to the Police Station to see the father. Son objected to the ill-treatment of the father. He was also detained. The entire night of June 19, both the father and the son were brutally tortured by the police officers under the direct supervision and aid of the Inspector of Police of the station. It is told that a volunteer group called Friends of Police was part of the torture team. More on Friends of Police later.  Apparently, the family provided additional clothes to change in view of the rectal bleeding.

As per the original FIR, the father-son duo rolled on the ground in protest and sustained injuries. They had been booked under sections 188, 269, 294 (b), 353, and 506 (ii). On June 20, both were taken to Sathankulam government hospital. The doctor was pressurized to provide a certificate of medical fitness. They were presented to the Judicial Magistrate P Saravanan at his house at Sathankulam. Without following the due process, without even examining the ‘accused’, without even talking to the ‘accused’, Judicial Magistrate Saravanan granted judicial custody. The police apparently threatened the father and son not to speak in front of the magistrate.

Even though there were sub-jails at Srivaikuntam and at Tiruchendur which are located at a distance of about 40 Km, Jayaraj-Bennicks were taken to Kovilpatty sub-jail which is located about 100 Km from Sathankulam. The Kovilpatti sub-jail admits them after recording bruises to the gluteal region and bleeding injuries sustained by them.

On June 22, Bennicks complained of chest pain, fainted and was rushed to the hospital. He died on June 23. On June 24, Jayaraj dies in the same hospital.

Violations of Due Process of Law

Before proceeding further, let us highlight a couple of key violations of the due process of law here.

According to Justice Chandru, former Judge at the Madras High Court, Supreme Court guidelines in the light of D K Basu Vs Government of Bengal case, clearly says that the accused will not dare to talk about police torture. Hence, the magistrate should examine the health condition, should check if relatives have been informed, whether the accused has got a lawyer to defend his case. In the same case, the Supreme Court upheld two rights of the accused. It was the Right to Life and Right to Know.

According to the law, the police must take those arrested for medical examination. A doctor is required to list any pre-existing injuries as new wounds would be evidence of custodial abuses.

As a result of widespread public anger and protest, the Madurai branch of Madras High Court took suo-motu cognizance of the offence and started monitoring the case. The point to be noted here is that the trading community who were behind these protests is a politically powerful force in Tamilnadu. In caste terms, it is known as Nadar community.

The High Court-appointed Kovipatti magistrate Bharathidasan’s report, Sathankulam Head Constable Revathi’s witness helped in converting the case from Section 176(1)(A) to Section 302 of IPC. 5 policemen including the Inspector of Police have been arrested and are behind the bars.

The extract from the Suo-Motu petition from High Court 528/2020:

District Police administration has done everything to prevent HC directed magistrate Bharathidasan from proceeding with the enquiry. D.Kumar, Additional Superintendent of Police and C. Prathapan, Deputy Superintendent of Police were available in Sathankulam Police Station. In their presence, other policemen were taking videos of magisterial proceedings. The policemen were not providing relevant records to the magistrate. One Police Constable by name Mahajan made a disparaging statement to the magistrate, “you can’t do anything”. Based on the report of the learned magistrate, Hight Court took cognizance of the Criminal Contempt of Courts Act, 1971 against the ASP, DSP and the Constable who misbehaved with the Magistrate.

Such a gruesome and shocking event raises a few questions.

What is the legacy and background to the police brutality and high-handed behaviour in Thoothukudi District? Who are these Friends of Police? What is their political connection? What is the way forward?

When one thinks of Thoothukudi, we recollect anti-Sterlite agitations that took place during May 2018 and the indiscriminate police firing on 22 May 2018.

The police started shooting at the protesters and were also accused of shooting without any formal warning. Police were also reported of intentionally shooting at the heads of the protesters. 13 protesters were killed including a 17-year old school student, and dozens were injured. Another man injured in lathi-charge by the police passed away in October 2018, after being in coma for five months. Thus, taking total death toll increased to 14.

FIRs filed in local police stations, claimed that the order to shoot was issued by officers in the rank of deputy Tehsildars and people pointed out that only collectors have the authority to issue shooting orders.

UN human rights experts have condemned the apparent excessive and disproportionate use of lethal force by police against protesters. The plant is run by Sterlite Copper, a business unit of Vedanta Ltd., which is a subsidiary of the UK-based company, Vedanta Resources.

So, other than the political patronage, we need to investigate the role of Sterlite company in patronizing the brutal police force in Thoothukudi district. The behaviour of police officers in front of the Judicial Magistrate adds credence to such questions.

Tamilnadu government has formally banned the movement of Friends of Police after their role in the deaths of Jayaraj and Bennicks surfaced.

Where do we go from here? Mere punishment of culprits in this custodial death is not sufficient. The system has to be rectified.

Though India has signed UN Convention Against Torture (UNCAT), 1997, India is one of the 18 countries yet to ratify the Convention. Torture should be considered as an endemic and a systemic problem. Cruelty and torture are violative of Article 21 of the Constitution. This interpretation is consistent with the principles contained in UNCAT. UNCAT aims to prevent torture and other acts of cruel, inhuman, or degrading treatment or punishment around the world.

Parliament had earlier considered The Prevention of Torture Bill (2017) to “provide punishment for torture inflicted by public servants” or by “any person inflicting torture with the consent or acquiescence of any public servant” and related matters.

Accordingly, the draft bill suggested that punishment for such offences would be imprisonment for a term not less than three years, but extendable to 10 years and a penalty.

However, the Bill lapsed with the 16th Lok Sabha dissolved in 2019.

Since the Jayaraj-Benicks case came to light, the Tamil Nadu Police removed over 80 police officers in the Trichy range for want of “interpersonal skills” while dealing with the public.

“We are removing 80 police personnel in the Trichy police range who need behavioural correction to improve their interpersonal skills. They are taken off duties involving direct public contact as their track record in that aspect is found wanting,” Deputy Inspector General of Police (Trichy Range) V Balakrishnan said in a Facebook post.

The DIG added that they would be gradually reintegrated into regular duties “only after completing a specially designed course with CBT (Cognitive Behavioural Therapy)” that would involve a component to improve “the way they deal with the public”.

As per the editorial page article which appeared in The Hindu on 3rd July, Ajit Prakash Jha, former Chief Justice of Delhi and Madras High Courts writes that India’s Attorney General spoke in UN Human Rights Council in Geneva in 2017, invoking Gandhi and Buddha and had stated that “India believes in peace, non-violence and upholding human dignity. As such the concept of torture is alien to our culture. It has no place in the governance of the nation”. Justice Jha hastened to add that this would be the text example of hypocrisy.

Author is a social activist based in Bangalore. Views are personal.

Read About: Extra-judicial Armed Forces Interventions in the North-East 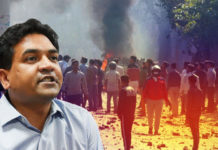