Robert Mugabe, who passed away on 6 September 2019, was the leader of Zimbabwe for nearly 40 years. He was a controversial figure who straggled the line of African liberation struggles in a messy era of neo-liberal ascendance. In his time, he championed African Independence and black emancipation, but also saw a decline of his country’s sovereignty to the forces of capitalism.

Mugabe was born in 1924 to a family from the Shona community. The Shona community represents nearly two-thirds of the current Zimbabwean population and the bulk of the rural peasantry in the country. He began his adult life as a teacher, but within a few years, he began to be involved in politics, supporting the National Democratic Party under Joshua Nkomo. The National Democratic Party was replaced by the Zimbabwe African People’s Union (ZAPU). At the time, Zimbabwe was called Rhodesia and was controlled by the minority Rhodesian White population. In 1964, Mugabe began taking part in non-violent protests against the white rule in Zimbabwe, which led to him being imprisoned for sedition for a decade. He had lost a son while in jail and was not allowed to visit him. He began to adopt Marxist- Leninism and upon his release, he left Zimbabwe and formed Zimbabwe African National Union (ZANU). ZANU carried on the struggle for Zimbabwean independence by organizing the rural Zimbabwean Shona peasantry. At the same time, ZAPU had also become militant, organizing the people in industrial areas, leading to the Zimbabwean liberation war. The war lasted nearly 10 years. After the war ended, Rhodesia was renamed Zimbabwe and elections were held, where ZANU won the majority, and the lead opposition party was ZAPU. ZANU was renamed ZANU-PF (Patriotic Forces).

On winning the election, Mugabe was said to have softened his stance. He called for reconciliation between the white population and the black population of Zimbabwe. He also integrated the revolutionary forces who followed ZANU and ZAPU into the Zimbabwean army. He had promised that he would not take any steps to nationalize white-owned land, even only 6000 white families controlled around 40% of the land in Zimbabwe. Still, many white politicians accused Mugabe of having an anti-white bias. In general, his actions did not make any strong socialist impact on the country. His economic policies increased spending on healthcare and education but were also strongly directed towards attracting foreign investments. While education indicators were rising in the 1980s, the real income of Zimbabwe fell.

Relations with Nkomo’s ZAPU party also soured after independence, leading to ethnic tensions with the Ndebele people, the ethnic base of the ZAPU. Some members of the community accused Mugabe of forgetting them. Unwilling to anger the white population, Mugabe failed to implement needed land reforms in the country to prevent famine in the country. Some former members of the militant wing of ZAPU, then began working with militant groups and violence began to escalate, leading the over thousand of civilian deaths in Zimbabwe. Western powers hoped that Mugabe would continue his policy of appeasement to the White Zimbabweans, and prevented the issue from being raised internationally. While at the time, Mugabe denied any violence done by the state against the people, later in life, Mugabe said that the violence had reached mad proportions.

In the late 1980s, Mugabe moved further away from socialism, removing any reference to Marxism or scientific socialism in his party’s literature. Zimbabwe also increased the number of loans it took from the IMF and it’s economic policies also began to become more capitalist. Mugabe tried abandoning his white appeasement policies and tried to redistribute the land belonging to whites, which amounted to nearly half of Zimbabwe’s fertile land. Western powers, the World Bank and the IMF put pressure on the state, on the threat of withdrawing foreign aid, which led to an appeal process. Even within Zimbabwe, there were accusations of corruption and mismanagement of land reforms, as many landless blacks who were eligible for land could not get land.

In 1992, Mugabe’s first wife, Sally Hafron, had died. It then was revealed that Mugabe was having an affair with his, then secretary, Grace Marufu, who was also married. While Sally was considered a mother figure in the nation. Grace was considered to be more materialist. Her relationship with older members of Mugabe’s party, ZANU-PF were tense, as she was seen as a usurper.

The late 90s saw Mugabe making appeals against the white powers, both inside and outside of the country, in time of a declining economy and failed reforms. ZANU-PF began to lose popularity through the 1990s and the 2000s, though it managed to retain power, either on its own or through a coalition. Mugabe’s more open statements against the white population angered the foreign powers who accused Mugabe of anti-white racism.

In 2017, as Mugabe was getting older, his relationship with other members in ZANU-PF deteriorated. He had intended for Grace Mugabe to succeed him, though she was very unpopular with the old guard of ZANU-PF. Robert Mugabe’s relationship with Emmerson Mnangagwa, earlier his second in command, collapsed when Mugabe dismissed him as Vice-President, leading to Mnangagwa to collude with other members of ZANU-PF and the army to place Mugabe under house arrest.

In Mugabe’s final days, he insisted that the government after him was illegitimate, and supported parties opposing ZANU-PF. His health deteriorated over the last two years, leading to his death on 6 September 2019 at about 10:40 a.m.

Mugabe’s legacy is mixed from any ideological perspective. The western powers criticized him for human rights abuses, appeals to the black majority, and an authoritarian streak that lasted almost 40 years. His government began with a promise of black liberation in Zimbabwe but ended down a road of crony capitalism and lack-luster reforms. As many leaders in the neo-liberal era, Mugabe’s place was both as a threat and as essential to the neo-liberal agenda. Mugabe spoke many important truth to the people, but failed to implement the needed reforms for his country, stopping at a series of half-measures.

Criminal Contempt: Should It Be Unconstitutional?

Devanoor Mahadeva: The Chakravarti Has Lost the People’s Trust 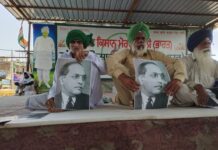