The story of Gurtej Singh, aged fifty-seven, gives us a glimpse into the everyday life of the farmers protesting across the borders of Delhi against the three anti-farmer laws of this government. Singh has been part of the ongoing farmers’ protest for the last five months. Singh, a farmer from Moga district in Punjab, studied till the tenth grade. His family stands in sharp contrast with the stereotypes that exist around the economic and social lives of farmers. His son, a graduate, is currently working in Chandigarh with a solar plant company. His daughter is in Canada for her higher education. Singh’s younger brother has settled down in Canada.

Singh’s family has three buffalos and one cow. The family doesn’t sell the milk from cattle but they use it for the family and also provide milk to those with no cattle. The family along with wheat and rice cultivates green grass to feed the cattle. Gurtej Singh’s father, who is a senior member of the household, is 85 years old and still works in the field. He has been taking care of all the housework since the protests. They need at least two litres of milk daily for their father. Singh laughs while saying that his father cannot have meals with no milk products. According to him, this is the secret of his father’s health.

Singh shared that his father stands in full support of the farmer’s protest and had told him to return only after the laws are rolled back. Singh’s son also takes leave from his work and actively participates in the protest.

Also read: “Lawyers Gave Us Lectures at Toll Plazas to Educate Us”

Singh is now a prominent figure in the farmers’ protest. A farmer who led a peaceful life in his village with his family of five is today living on a trawly in the Singhu border. He explains, “since the members of my family are well educated, we know these laws in and out. I do think of and feel like going back home, but no home is more important than our ongoing struggle. We would fight until this government rolls back these three anti-farmer laws. Our struggle till date was different. Now the movement is taking a different form in response to the tricks played by the government; our struggle now is between dying and winning. We are not going to move from here till we win this fight. None of us is going back till these laws are rolled back.”

Interestingly these farmers have sold their wheat to an Adanai company, DAGURU Xylos which has been functioning just two kilometres away from Ratinya village of Moga district. Gurtej Singh explained, “we did not know the company belonged to Adani. Initially, we were all paid good rates for the crop. Those farmers who got more farmers to sell their produce to them were also provided with a commission. However, after a few days, they started taking our produce after examining the sample, and they often would reject it by citing the bad quality of the produce as a reason. We would then go to the government mandis and sell our produce.” He further explained, the wheat would be exported without their knowledge and said, “We didn’t know much about this company till the central government brought in the agriculture laws. Ever since we learnt that DAGURU company was Adani’s, we have closed down the company. In the same vicinity, there are few Adani owned companies that bought rice, and all of these companies have been shut down for the last five months.”

The farmers protesting here, just like Gurtej Singh, see through the attempts of the government to privatize the agricultural sector. They understand that these private companies would not be on their side. This knowledge and realisation have encouraged farmers to come to the Singhu border in large numbers and participate in the protest. There are many extended families of the farmers here who are providing various services required to get the protests going. Singh’s brother for example who lives in Canada had provided the farmers with shawls.

Gurtej Singh is determined to stay at the protests, away from home, until the laws are rolled back. He said, “my wife and son keep asking me to visit home. I didn’t even go to attend an engagement party of a relative of my wife. I told them that my leg was hurt. However, my father has told me to return home upon winning this fight.

First published by naanugauri.com and translated by Yogesh S

May day will be celebrated as Majdoor Kisan Ekta Diwas : SKM-Trade Unions 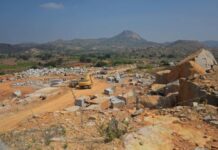