West Bengal in its second phase of Assembly elections held for 30 seats, recorded a voter turnout of nearly about 82 percent, amid sporadic cases of violence in Nandigram, Keshpur constituency. TMC, the ruling party of the state, and BJP have accused each other of booth jamming, rigging, and threatening of their respective booth agents. Chief Minister Mamata Banerjee even slammed Election Commission and CRPF for not responding responsively to complaints of booth capturing by BJP and for allegedly working on the direction of Amit Shah. Suvendu Adhikari, the former minister from TMC and now a BJP candidate, and Mamata Banerjee, both of whom have been contesting for the Nandigram constituency, have challenged to defeat each other with a great margin.

Suvendu Adhikari’s father and brother Sisir and Dipyendu Adhikari, MPs from East Midnapore and now TMC turncoats, who are commonly known as ‘Adhikari family’, enjoy a considerable influence over the whole district. Shuvendu Adhikari,
after resigning from TMC just before a few months ago the election, started playing on the narrative of religious polarisation of Sangh Parivar and BJP by conjuring up baseless arguments of ‘appeasement politics’ of the minority by TMC, just to consolidate the Hindu voters in his favour. The grievances of people against the local TMC leaders are genuine enough, for their alleged involvement in various cases of corruption, extortion and failure in the disbursement of compensation money of cyclone Amphan. But the vicious campaign of referring to Mamata as a ‘Begum’ and telling voters that a vote to TMC means a vote to Pakistan, is largely affecting the social dynamics of Nandigram. According to the Census of 2011, the Nandigram assembly segment had a total population of 331,054, of whom 244,867 (73.96%) were Hindus and 25.88% were Muslims. Scheduled Castes made up 16.46% of the population. With people like Yogi Adityanath, Smriti Irani frequently coming to Bengal and furthering the hate ideology of Hindutva and pro-corporate policies underneath, there is an attempt being made to wipe out the history of a shared past of struggle and coexistence of Hindu and Muslim communities. People from the Muslim community have expressed their anger for being called ‘Pakistanis’.This kind of extremist communal politics is very unfamiliar to them as they have co-existed peacefully for decades.

Nandigram which is being treated as a hot topic by media for two heavyweight candidates and the simmering communal tension also had been a sight of farmers’ movement in 2007, against a forceful land acquisition move by the then CPI(M) government for the construction of a chemical hub by Indonesian Salim group. In the united struggle, both the people from Hindu and Muslim communities had lost their lives to state terror and still stood by each other strongly.

The narrative of the farmers ‘ movement in Nandigram is altogether absent in mainstream media amid the usual skirmishes between Mamata Banerjee and Shuvendu Adhikari. When Banerjee, from one of her public meetings, just a few days before the election, accuses Shuvendu Adhikari of being equally responsible with the government for letting the police unleash terror on farmers to crush their movement back in 2007 in Nandigram, a narrative is being built by the CPIM activists and its sympathizers to misrepresent the whole movement as just a conspiracy against their government. They now want to do away with the wrong measures taken by them and terror inflicted on people by many of their workers. But back in 2007, villagers formed Bhumi Uchhed Pratirodh Committee (‘Committee against Land Evictions’), which also included people from various Left groups, spearheaded the anti-corporate struggle for their cultivated lands. Infamously, 14 people were killed in police firing on March 14, 2007, with news of many gone missing and women being raped.

But before the agitation in Nandigram, Singur, a place in the Hooghly district, also saw farmers’ uprising in 2006 against the farmland acquisition for a proposed Tata Nano car factory. In a bid to industrialize the economy and create opportunities for employment in Bengal, the CPIM government thought it right to create Special Economic Zones(SEZ), a commercial area specially established for the promotion of foreign trade and to attract a large flow of foreign investment. SEZ guarantees any industrialist of 100% tax exemption and relaxation from strict labor laws and no state interference. Neo-liberal economic policies were ushered in India after the New Economic Policies got implemented by the P.V.Narasimha Rao government in 1991, with disinvestment of the public sector, reduction of taxes, and deregulation of the market, ensuring free trade.SEZ was the direct fallout of this neo-liberal capitalism and imperialist globalisation.

Not just Nandigram, in Odisha’s Kalinganagar, Maharashtra’s Raigad, at Goa, and Andhrapradesh too, when the government tried to implement SEZ, it faced fierce anti-corporate resistance from people in defense of their land, water, forest, and livelihood. CPIM was criticized several times for their failures to work for the interest of the workers and rather upholding the neoliberal model of development that would further exploit the workers and deprived the farmers of their fertile land. No denying the fact that TMC was able to garner votes in its favour to come into power for the first time in 2011, after the massive electoral defeat of CPIM, but the martyrdom of 14 people and the farmers’ resistance can’t be belittled to just a ‘conspiracy’. 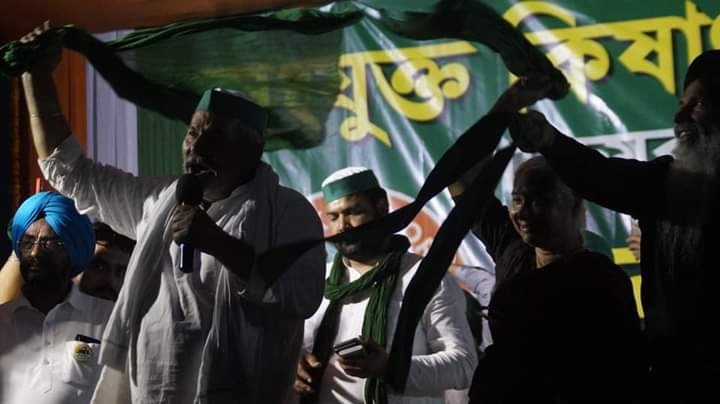 So it becomes significant when leaders from Sanyukt Kishan Morcha, a joint forum of farmers’ union fighting for the repeal of the pro-corporate farm bill, came to Bengal and visited Nandigram. Rakesh Tikait and Medha Patekar, who herself was part of the movement in Nandigram, have appealed to people from a mahapanchyat held in Nandigram, not to cast a single vote for BJP. Medha Patekar even severely criticised the self-centered politics of Suvendu Adhikari and told the people of Nandigram to unite against communal politics of BJP, to forge brotherhood among them, as they did in 2007.

The return of Yogi and democracy of fear in Uttar Pradesh

Decoding the counter-intuitiveness of UP Assembly Election results

Farmer Leaders Darshan Pal, Yogendra Yadav amongst other 37 named in...