This comes a day after Mulayam Singh’s daughter-in-law Aparna Yadav joined the BJP.

Pramod Yadav while leaving the party accused party chief Akhilesh Yadav of imprisoning Mulayam Singh Yadav and said his condition was very bad within the party at present.

He even said, “Criminals and gamblers have been inducted to Samajwadi Party.”

After joining the party, Aparna declared that she is highly influenced and impressed by both Yogi and Modi. “I feel their polices are morally right and that is the reason I have joined BJP.”  She also mentioned that “Rashtra Dharm”(duty towards country) is above all for her.

Despite being an important part of Mulayam Singh family, she considers UP Chief Minister Yogi Adityanath as her elder brother and praises PM Modi on all issues. There was talk of her going to BJP for some time which turned into reality today.

It is reported that Aparna Yadav sought ticket from Lucknow Cantt, but SP National President Akhilesh Yadav has decided not to field anyone from the family. This seems to have miffed her and consolidated her decision to join BJP.

With the string of leaders leaving SP, the going seems to getting tough for the Yadav family.

Assembly polls in Uttar Pradesh will be held between February 10 and March 7. The election results will be announced on March 10.

On Saturday, the BJP released its first list of 107 candidates for the first two phases of polling on February 10 and 14. As many as 44 OBC names, including 16 Jats, figure in the list, followed by 43 from upper castes and 19 from Scheduled Castes.

Also read:Party-hopping equated to resurgence of social justice politics in UP!

The return of Yogi and democracy of fear in Uttar Pradesh

Decoding the counter-intuitiveness of UP Assembly Election results

Shaheen Bagh BJP Row: Why Is It So Easy to Discredit...

Why we need to be concerned about the DNA Bill? 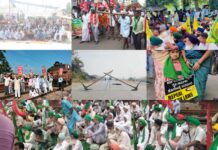