Farmers, workers, and women came out in protest in Bihar on September 15 against the economic exploitation of marginalized people during the lockdown and the insensitivity shown by the banks to the poor.

Ever since the beginning of the pandemic and the lockdown, the working class have found themselves in severe distress. Not only has the government not provided any relief to them, but instead has continued to collect debt repayments from self-help groups, even as big corporates are being exempted from loan repayments.

In order to oppose this, CPI(ML), AIARLA and AIPWA called for a nationwide protest on September 15. Thousands of women took to the streets in UP and Bihar to protest.

Apart from Patna in Bihar, thousands of rural women came out in protest in Bihar, on the streets in Siwan, Darbhanga, Samastipur, Jehanabad, Ara, etc, and demanded a stop to the extortion of small loans by microfinance companies.

Protestors raised slogans demanding that the interest rate be reduced to half, that interest on interest be stopped, that loans taken by women’s self-help groups be forgiven, and questioning why women’s loans are not being forgiven even though capitalists are getting loan waivers worth lakhs of crores of rupees.

The protest march in Patna was stopped at the radio station, where protestors brought up the issue of widespread unemployment and starvation, due to work being shut for the past 5 to 6 months and a complete lack of income. Although the Prime Minister had announced a scheme for employment, there is no certainty about whether that will come to fruition. Even education of poor children has been halted for six months. Expenses like electricity bills are continuing as before. In such a situation, without any livelihood, how are women’s groups to repay the loans they had taken before the pandemic?

After the immense crisis created by the lockdown, poor and marginalized communities across the country are being forced to come out on the streets to protest even during a pandemic. This shows that the people have had enough of the government’s complete neglect and inhumanity towards its own people.

Yemen Strike on Saudi Oil facility and its Imapct on Oil...

Violation of Child rights with regard to Hijab row: Shimoga reporter... 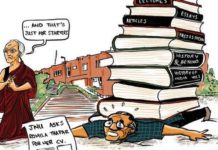 Voices Against the Privatisation of Visakha Steel Plant