[Note by the translator: The twin daivas(spirits) of Koti and Chennaya are one of the most popular folk deities of Tulunadu. Along with other daivas or bhutas such as Kallurti, Bobbarya, Maisandaya, Alibhuta, Koragajja, etc., Koti-Chennaya get venerated in the length and breadth of the Tulu region. Numerous studies suggest that most daivas are reminiscent of the folk heroes of that name, who were subjected to oppression of different sorts to maintain the hierarchical status-quo of the traditional Tulunadu. When they became mayaka (or perished fighting that oppression), they started getting venerated. Being born in the Billava¹ caste, Koti-Chennaya were subjected to constant treachery and harassment, even though they came close to power centres. It is roughly estimated that the twin brothers lived in the seventeenth or the eighteenth century. The following story of Koti and Chennaya is a translation based on the story written by Shri Panje Mangesha Rao, an early litterateur in Kannada. Panje himself got several (Tulu) versions of the story – one of them from Hermann Moegling of the Basel Mission. Comparing and contrasting, he finally arrived at the following story in the early twentieth century.]

This is Part II of the 14 part Koti- Chennaya series

As Deyi approached the Kambala field, she started experiencing the labour pain unexpectedly. Deyi stopped there leaning onto a coconut tree beside the field. Mallaya Buddhivantha, the minister of Ballala, came the same way at that moment. Without bothering about her predicament, he angrily remarked “You, Billava female! Dare to block my way?! Audacious woman!” At this, Deyi sighed and said with composure, “If I stood here out of my audacity, I would face the consequences! If I am here because of my labour pain, my children would retort.”

However, by then the news of Baiditi’s pain reached the beedu. Perumaalu Ballala responded to Deyi’s needs and arranged for the delivery. In a closet of the beedu, Deyi delivered twin boys! After a few days, the children were christened. The elder boy was named Koti, after the southern God, Koteshwara. The younger boy was named Chennaya, after the northern God, Chenniga.

After christening the children, Deyi Baiditi did not survive for long. We do not know whether she died naturally or because of the wicked ploy of Ammanna Baidya and Mallaya Buddhivantha. But the Ballala of Padumale did not give up those twin children who were now orphans. He called an uncle of those children, one Sayina Baidya. He gave him the children and asked them to be looked after. He also gave him cows, buffalos and clothes for the children. Koti and Chennaya grew up in the house of Sayina Baidya and Baiditi.

In Padumale, there was a vast playground, where the village children used to play in the evening. All children of the village without any discrimination – rich and poor or Vokkaliga and Baidya – played there. One day the game ended in a quarrel. The Billava children had won the game and the Vokkaliga children had lost. Buddhivantha’s children, who were in the latter group, then demanded rent from Koti and Chennaya for the ground where they played. Chennaya claimed that it was not a condition before the game started. Thus, the quarrel intensified and the children stopped the game. Finally the ball remained with Koti-Chennaya. Buddhivantha’s children went home bear-handed and crying.

At home, Mallaya Buddhivantha saw his children crestfallen and heard their complaints about the twin brothers. Buddhivantha went in search of Koti-Chennaya. He found them playing with each other merrily, on their way home. He snatched the ball forcefully from them. The twin brothers did not attempt to get the ball back, but only said, “Oh sir, please preserve the ball; what you snatched from our tiny hands, will be gotten back when they are big!” Having said that, both the boys walked home. Thereafter, there were frequent quarrels between the Buddhivantha’s household and that of the Billava’s on small issues. Complaints were often received by the Ballala by either of the parties. He thought it would be good to separate them rather than entertain complaints again and again. He said, “If you are in the same neighbourhood, you would keep quarrelling. Therefore, I am dividing the land. The lower field should go to the Buddhivantha; the upper field would belong to the Billavas. However, he made it a rule that the Billavas pay a token gift to the Buddhivantha when they ploughed the field. Thus, Koti-Chennaya left the place called Anilaje and settled in a place called Eraje.

Though Koti-Chennaya were far from sight, Mallaya nursed a grudge within him against them. One day, this bitterness exploded. As per the annual rituals, the Kambala festival of Anilaje was to be celebrated. Buddhivantha was going to the astrologer to seek advice regarding the auspicious time for such festivity. He had to go to the astrologer via Eraje, the place of Koti-Chennaya. As he passed their place, Koti saw him and said, “Sir, please seek the astrologer’s advice for our Kambala too.” He gave a coconut as offering for the God at the astrologer’s. Apparently Buddhivantha agreed. However, as soon as Koti disappeared from his sight, he ate up the coconut, drank its water and proceeded as normal. On returning he said, “for the Kambala at Anilaje, the auspicious time is this Tuesday; for your Kambala, it is the next Tuesday.” Now Chennaya suspected his words to the core. He decided that their Kambala too would happen on the same Tuesday when Buddhivantha celebrated his. Buddhivantha came to know about this plan of Chennaya. He got furious. He came to Koti-Chennaya and said, “So you too got the same day for the Kambala? I will have mine tomorrow itself. By tomorrow dawn, before the women come for water, your oxen will be in our fields.” Warning them thus, he returned. Next day, Koti-Chennaya ploughed a few lines of their field. Only after levelling the field, they sent their oxen to Buddhivantha’s field with a couple of servants.

Buddhivantha grew jealous at the fact that the field of the Billava boys was ploughed first! When he saw the four oxen of Koti-Chennaya in his field, he furiously started beating them in the pretext of ploughing and levelling the field. Koti-Chennaya saw him thrashing the oxen. “Sir, it is improper to flog someone else’s oxen like this. When you beat them, we feel the pain in our heart. If you have any vengeance against us, confront us directly; please don’t show it on the poor oxen”, they said directly. To this, Buddhivantha hesitantly said, “hm…”.

The celebration of Kambala concluded as per tradition. As was the practice, they were required to sow the seeds following Kambala. Buddhivantha brought seeds in a palanquin and Koti-Chennaya brought the seeds in a basket. They sowed the seeds and installed the pookare as per the usual custom.

The Kannada version is translated into English by Shashikantha Koudur (Professor in Humanities at National Institute of Technology Karnataka, Surathkal

Black Lives Matter: Protests across US over the murder of George... 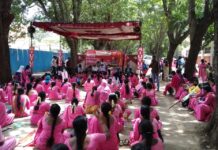 Half a Million South Korean Workers Walk Off Jobs in General...