Mandya, Karnataka: The atrocities against Dalits continue to get reported from the State and elsewhere in the county. In one such fresh case which has come to light from Mandya district where a Dalit man has not only been  thrashed but he was also paraded by tying him with a cow.

The incident has happened in Dugganahalli village of Malavalli taluk where the Dalit man, a 32-year old Suresh Vardhan was accused of theft, and thus some people decided to ‘punish him for the crime’ in this way.

The video of him being paraded went viral, the incident took place a week ago. The Rural Police though have registered the case, however the accused Raju, Sundramma, Mallayya and Girish are still absconding.

Reacting to the incident, Deputy Superintendent of Police Lakshmi Narayan has told the portal, Nanugauri.com that the investigation is underway and the efforts have been made to arrest the accused.

According to reports, Suresh was working in a private company in Bengaluru, however because of the Covid pandemic and lockdown, he had returned to the village. He had planned to undertake animal husbandry for a living.

During the process, he met Raju through his contacts and decided to buy a cow from Raju.

Suresh narrated the entire episode and the ordeal he went through to nanugauri.com.

“ I bought a cow from Raju by paying Rs. 44,000. Raju had claimed that the cow gives at least 15 liters of milk every day. But even after over a fortnight, the cow did not give more than three liters of milk a day. I said this to Raju over the phone and told him clearly that he has cheated me. Later, Raju offered to give me one more cow for Rs. 14,000. I later found that it was not a milk yielding but an unproductive cow. This was also confirmed by a veterinary doctor”, he said.

Dismayed after being cheated twice, he told the entire incident to one of his friends. Later, Raju reportedly told Suresh that he could take one more cow for free and asked Suresh to visit the house on October 12.

“ After which, I went to his house to pick the cow, but I found that Raju was not at home and I was told that he is working in the farm. So, I thought to pick the cow and meet Raju at the farm itself, but soon after I picked the cow, some locals began shouting and blaming me of stealing the animal. They all began thrashing by surrounding me. They even try to kill me by pushing in the well. I began pleading with them, but none of them, including Raju, heed to my pleas. He hurled abuses at me. Later, they tied my  hands to the one end of the rope tied to the cow and paraded. Meanwhile they were all recording the incident on their mobile phones. Then they handed me over to the police. Though Raju tried to file a complaint against me, the police made us to have mutual agreement before releasing me”, Suresh said.

Meanwhile, the videos made by Raju and his friends went viral on social media. Suresh said that the videos have shocked him and the residents of his village.

“ I was undergoing mental agony for the crime that I did not commit. I explained the entire incident to the villagers and relatives, who till then were under the impression that I was stealing the cow”, he Suresh.

As per the suggestion of a few leaders of the village, Suresh finally decided to file a complaint with the police against Raju and others.

“ What was shocking is that even the Police Sub Inspector, Ravi Kumar was talking in favour of the accused when I went to register the case. In fact he threatened to file a case of theft against me. But later, with the help of some leaders of our community, we met DSP who went through the video which had gone viral. Only after the case was filed”, he said.

Meanwhile, M. V. Krishna, a Retired Principal said that even today, Dalits are being discriminated in Malavalli taluk. Some saloons do not allow people of Dalit community and some hotels have kept separate vessels for Dalits to serve food. Despite holding several protests, the situation has not changed”, he rued.

Krishna said that in the present case, the police have tried to blame the victim itself but have not arrested the accused till date.

The story was first published in our Kannada website naanugauri.com. It has been translated into English by Firoz Rozinder. 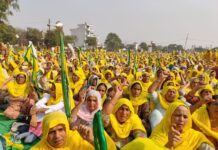 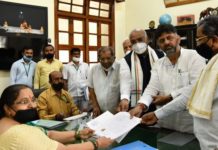 Ilhan Omar and Other Democrats Vote For More Military Aid to...