A detailed report published in Article 14 focuses on how Karnataka tops the list of states to have the most sedition cases filed against citizens for social media posts or comments. The following is a summary of its findings.

“Our database reveals that across India, 102 cases were filed against 152 people for creating audios, photos or videos or for sharing content on social media. And 55.9% of these were filed in Karnataka and UP.”, the report says.

Kishorechandra Wangkchem and Kanhaiya Lal Shukla, two journalists arrested for sedition, had filed a writ petition before the Supreme Court on 23 February 2021. They challenged the constitutionality of the 151-year old sedition law. Four months later, the petition initially listed for hearing on 12 July 2021 is now scheduled for 27 July 2021.

This isn’t the first time that the legality of sedition has been challenged. In 2016, Common Cause, an advocacy filed a PIL on this matter. In 2021, three lawyers had filed a petition challenging the constitutionality of sedition. Both were rejected, the latter by a judge headed by the previous CJI SA Bobde.

The increased usage of social media as a means of communication and the use of internet in almost every activity has also made it easier for the executive to slap people with charges of sedition. Some plead innocence owing to ignorance, illiteracy, or lack of information on the matter, however to no relief, as happened with a 21-year old youth belonging to a village in Karnataka.

Junaid (name changed) was arrested for sedition for posting a picture on social media to applaud the Indian army for its Balkot strikes. However, due to his incapacity to read, he had posted an image which bore the caption “I stand with Pakistan Aramy (sic)” and was soon taken away by the police. Five others from the nearby areas, none of whom could read English, were arrested on the same lines.

B Sudershan Reddy, Former Supreme Court judge had explained in 2020 that even shouting “Pakistan Zindabad” would not amount to sedition as India hasn’t declared the neighbouring country as an enemy state and that sloganeering by an individual does not amount to a threat against the Indian state.

Article 14 found that 84 people were arrested for Facebook activity—a little more than half of all those arrested for their online activity across the country.

In 36 sedition cases, the accused created or forwarded WhatsApp messages, or were administrators of WhatsApp groups.”The accused in many of these cases are poor people from rural backgrounds, or students” Article 14, reported.

There was even an instance of a non-punctuated Whatsapp status landing the individual in trouble. In an attempt to convey his solidarity, a 19-year old with partial knowledge of English wrote “We Will Wait and See India Bad Time Start Now Any Way Pakistan Never Give up Must Take Revenge” after India’s Balkot strikes. What he meant though, according to his translation was: “We will wait and see. Bad things have started for India. For this, Pakistan will definitely take revenge.” In return for his national pride, he was charged with sedition and judicial custody of five months.

“In Karnataka, nine of the 20 social media-related sedition cases were against rural internet users.”

Most were first-time smartphone users. The local mobile shop employee downloaded and set up accounts on Facebook, Whatsapp and Youtube for most of these men. Villagers were then added as friends on Facebook, and the new number added to village-level Whatsapp groups. Many said they couldn’t read English or Kannada

These arrests go against two supreme court judgements in 1962 and 1995 that states the sedition law cannot be used in cases where slogans from individuals do not incite violence.

88% of these sedition cases have been filed in the years following the coming to power of the Modi Government in 2014. This percentage is above the national average of 65% according to the database of Article 14 which has recorded a total of 816 sedition cases and nearly 11,000 affected individuals. It is important to note that in this period, Karnataka was mostly ruled by the Congress-JDS coalition until recently, indicating this is a weapon used by the ruling government to usurp power.

The police officers who filed the cases consider it their duty and leave it to the discretion of the court to take a call on the issue after they have registered the complaints initially.

Casual interpretations and far-reaching associations are made to relate Muslims and Kashmiri students in Karnataka labeling them as anti-national individuals. These harsh punishments might further alienate the young minds from marginalised communities in the country. 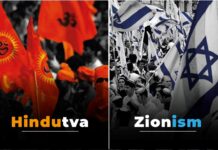 Pragya Thakur: Dunking Basketball, dancing at Weddings but “too ill” for...

Followers of Ambedkar should vote for SP, throw out BJP: Akhilesh...