Kannan Gopinathan, former IAS officer, who served seven years in service resigned from his post of secretary of power, urban development, and agriculture departments in Dadra and Nagar Haveli administration citing a lack of freedom of expression 10 days ago. Kannan had worked anonymously during the flood relief in Kerala last year.

Here we present the transcript of Kannan Gopinathan interview with the Wire, news website.

Q: Kannan how have your colleagues, seniors, and batchmates reacted to your resignation?

KG- The decision has surprised my colleagues but they have all been supportive. Some of them are trying to convince me that service offers a lot of learning opportunities and that I can contribute by being in the system than by giving the statement and resigning from service. I have weighed what could be achieved and what is the importance of speaking out now. I have to weigh in with my own set of standards and emotions. I have weighed that and I think to speak out now is more important to me. I am not saying whether I will have the same opinion after 20 years down the line but for now, I am very sure that speaking out now is more important than staying in service.

Q: Leaving a secure job with a lifelong job tenure in this economy is a very very bold move. Did you think it through?

KG: As I said, I will get something to work. In my family we were discussing, instead of having 2 ACs in both bedrooms,  we might have to live with one AC, which is fine. I entered the service on my capabilities, if I am good enough for service, I am sure I will be able to do something for my livelihood. The service should not become a weakness, a chain. If I want to leave, if I want to say something, then I should have the freedom to leave or freedom to say, otherwise, you get defined by your service your title. The IAS becomes primary and individuality secondary.

Q: There is an inherent contradiction in what you r saying. Do you not feel that there is more you can do for the citizen you want to speak for by staying in the system and service?

KG: There is no doubt being in the system one can do a lot. As a civil servant, there are two things you are expected to do- one is to do the right thing and the other is to stand up to the wrong things. While doing the right thing is easy; getting projects finished on time, delivery of goods, making a systematic improvement, last-mile delivery of service, nobody will interfere with these things. But the second thing to stand up to something that you do not agree with is the difficult one especially when there is no sufficient voice outside the system, then to do this from within the system is very difficult. For example, recently in Dadar Nagar Haveli, 500 Adivasis who were working on daily wages with the government were told not to come to work the next day. You asked me if I will be able to survive in this economy, imagine those 500 tribals in this economy. There has not been sufficient voice outside the system questioning this move. It is the job of media, civil society, opposition, citizens, so the entire ecosystem has to respond to it.

Q: Who is raising the voice?

KG: I was a senior officer in service but I could not do anything for those Adivasis. Now I have got a platform that I can tell about these issues. That is why I say that doing the right part is easy whereas standing up for the wrong thing requires support from the ecosystem.

Q: Issues of Tribals, marginalized communities, weaker sections of society are increasingly being eliminated from newspapers or news channels. That is not new. Why is it that freedom of expression and this not?

Q: is freedom been stifled or is it the media or civil society that has chosen not to speak for these people?

A: Freedom has been stifled in a particular context which is what I said in the case of Kashmir and 370A and 35A abrogation.  Government is within its rights to take such a decision but after that, the reaction to a government decision is also a fundamental right to any citizen. When you curb that..it is not managing it..its completely banning it. Is that not stifling the fundamental right of a citizen in a very direct way? I am from the system, I want questions to be raised so that I am on my toes, so I don’t end up making mistakes, intentionally or unintentionally. When you put the fear of not asking questions, once, twice, thrice, that systematically reduces the space of dissent. It has been happening for a long time and it has reached that point where the only thing you can say is in support of the government. It has become systemic. that the right to dissent has to be reclaimed.

Q: Some argue that for a strong state to ensure the delivery of goods, services, and welfare to all its citizens in order to do its job effectively it cannot be impeded by dissenters.

A: I think it is a slippery slope argument. So, if you want more development, dictatorship is the argument, is that what you are saying?

A: no no..definitely not. We are a democracy. Western democracies that are much older than us, much more robust have tried to find a balance and best way that sustainable development can occur. And especially in a diverse country like ours is only through the freedom of expression, more discussion.

Dissent need not be seen as questioning the country. It is just an alternate view of what one thinks is best for the country. I want the best for my country, but what i think, how i want it to be implemented could be slightly different from what u think or want to implement.

If you want to solve a problem, isn’t it better if five people think about it, dissent, deliberate or do you want one person to think and decide about it? All of us are thinking for the best of the country.

Q: Do you think dissent has become a loaded term in the times we live in?

A: we ourselves have put those attributes. if we are convinced about the right to dissent, there is no reason to be worried whether its a loaded term or not.

Q: So what are you disillusioned with? your service, state, political class, civil society, citizens, media that is not doing its job? You left a job where you can do good for people, so there must be some level of disillusionment.

A: It’s not disillusionment, it’s the belief that there is a larger cause to be made today. My reaction to the freedom of expression in Kashmir could be proven wrong. That is absolutely fine, but I want to stand up for my beliefs. I am disillusioned with the fact that we self censor for fear of being proven wrong. I am disillusioned that dissent has gotten a negative connotation. This is not good for democracy. In a democracy dissent is important.

For the last 25 days, a certain population has been denied their right to react, so there is a reason to take up the matter of freedom of expression right now. Whatever be the govt decision, but the reaction to that decision must be given in a democracy. You would have seen in case of hong kong protests. The government took a decision, people didn’t agree with it, so protests are happening. The government has not locked down the city.

Q: What is the feedback you are getting from your fraternity? Were they ready to accept your resignation?

A: They were quite firm in their belief that a lot can be done within the system and they were trying to convince me but once they understood that  I have made this decision they are also trying to argue with me.

Q: Because there is no going back from this…

A: Absolutely, and I understand that. I am 33. I am saying take IAS, I am ready to reestablish myself.

Q: what do u say to people who say there is another Shah Faisal in the making. When they say – that he is quitting the service where he can do good and now he wants to join politics?

A: Shah Faisal became IAS to do good for his people. He understood that he could do much more for his people through the political democratic system. so he had made that choice and that is his right.

If I become a businessman tomorrow would you be asking the question with the similar loaded argument? Or a teacher or a professor would you say he quit the service because he wanted to become a researcher? Would you ask this question?

if u see people in the current political system, they are all politicians including the prime minister, the opposition. They have also left something and come here. I have not thought about what I am going to do, but politics is not a bad thing to join.

it is not only important to give your voice but also to give an alternative choice. I would like to do some work connected with the public in some way. I have lived, studied, worked all over India, wherever I get a good opportunity to work I will do. I got a lot of respect for being in service and a lot of satisfaction. I would still like to get some level of happiness being connected to people. I want to continue working for the public in whichever way I can.

Q: Are you afraid of any backlash, concerns, repercussions from the state, ministry, govt.?

KG: No, not at all. In a democratic system like India, we have freedom but there are very strict conduct rules, so if I want to make an explicit statement, I have to take myself out of the system, which is why I have put in my papers. I would want the matter on which we are discussing that it is important to discuss amongst ourselves every day because there is a set of the population that needs its expression, the expression has to come out in a legitimate way in a democracy, that space has to be provided.

Q: I didn’t want to focus the conversation on J&K, because when people like you take such big decisions, it’s important to get to know the person behind that decision. 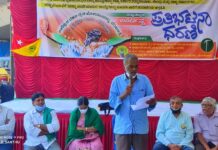 Enforcement of Farm Laws Despite Opposition is the epitome of Cruelty:...