“The alarm bells are deafening, and the evidence is irrefutable,” the UN Secretary-General António Guterres said discussing a report published on Monday by the Intergovernmental Panel on Climate Change (IPCC).

According to the latest report by the IPCC Working Group 1, scientists all over the world have been observing extreme changes in the Earth’s climate in every region and across the whole climate system.

Given the changes to the climate for which the report says, humans are to be “unequivocally” blamed, the earth will experience more extreme weather in the coming years and it will suffer the consequences of rising sea levels and melting Arctic ice.

Also read: Deadly Fires in Coasts and Rural Areas of Turkey for Past Three Days

Mr. Guterres also called the findings of the report “code red for humanity” and said that governments must come forward to work in the direction of tackling the challenges faced by the whole world by climate change.

Compiled by 234 experts from 66 countries, the latest IPCC report is the most comprehensive to be released by the UN panel since 2013.

The report through its detailed study and analysis of several occurrences and existing literature on climate change found that over the next 20 years, temperature globally is likely to rise by more than 1.5 degrees Celsius on an average.

That is a full 10 years earlier than the IPCC predicted just three years ago.

Global oceans have risen about 20cm (eight inches) since 1900 and the rate of increase has nearly tripled in the last 10 years.

Even though human activities which run the capitalist economic systems all through the world have made threatening changes to the climate, immediate, drastic, and sustained efforts to work towards massive reductions in emissions of carbon dioxide (CO2) and other greenhouse gases would limit climate change.

According to the report, such actions will manifest in the improvement of air quality quickly, but it could take over three decades to hold the global temperature to under the limits set by the 2015 Paris Agreement, that is if the entire world commits to degrowth over capital accumulation.

Also read: Climate change: what G7 leaders could have said – but didn’t

Three Adivasi Killed and Over a Dozen Injured in Open Firing... 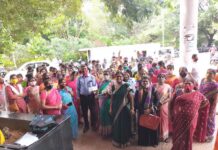