Last night, The Tribune has reported that the head of the Nihang sect behind the killing and the murder convict had met the Union Agriculture Minister NS Tomar in June.

Baba Aman Singh is head of the Nihang group that allegedly killed a man at the Singhu border, by chopping off his hand. Four Nihangs of this group have already been arrested for the killing.

On 15th October, farmers at Singhu border woke up to the news of a brutal murder of a Nihang Sikh named Lakhbir Singh by a fellow Nihang group. Since then two Nihang Sikhs at the border have surrendered and confessed of killing Lakhbir Singh.

There has been constant stream of news about the whereabouts of Lakhbir Singh and his connections with the farmers movement. It also came to light that he had only recently came to the Singhu border and was living with the group of Nihang Sikhs. The culprits said that he was trying to desecrate the holy book of Sikhism, that is why his hand was cut.

Samyukt Kisan Morcha has condemned the act and called for non violent and peaceful struggle. The incident is being used by opportunist forces to discredit the farmers movement.

Baba Aman Singh, who heads one of the Nihang sects, and a Sikh group based in Ontario, Canada along with murder convict Gurmeet ‘Pinki’ and Sukhminderpal Singh Grewal of the BJP Kisan Morcha had met at the bungalow of Minister of State for Agriculture Kailash Choudhary in New Delhi in late July.

The murder convict and one of the most controversial police officer turned dismissed cop Gurmeet Singh Pinki was also present in a lunch meeting. The meeting was supposed to be the behind-the-scene efforts by the government to end the farmers’ movement.

“We have held meetings to find an amicable solution to the farm stir that could vitiate communal harmony in Punjab. Baba Aman Singh attended one such meeting. He too wanted the issue to be resolved.The Ontario Sikhs and Gurdwara Council has been helping us in our endeavour,” Grewal told The Tribune over the phone.

Baba Aman Singh, Nihang chief, whose group members were arrested for barbaric killing of a man at Singhu border was spotted in meeting with BJP Ministers. pic.twitter.com/BO7kJqwbbw

According to the tribune report, Gurmeet ‘Pinki’ has confirmed his presence at the meeting and said he had known the Nihang Baba since their days at the Central Jail, Patiala. Two members of the staff attached with the Agriculture Minister (who could not be contacted directly) said the Nihang leader was “not part” of the negotiations held with the farmers. Choudhary did not respond to calls or messages. Baba Aman Singh brushed away queries regarding the meeting, saying he met various leaders every day.

The murder at the Singhu border has brought bad light to the famers movement. The leaders of Samyukt Kisan Morcha (SKM) has asked the Nihang groups to leave the farmers’ protest. But, Nihang groups retorted that they did not join the protest on their invitation, nor will they leave based on their call.

The mysterious circumstances of the murder at an open place like Singhu border has already raised lot of questions. This new information about the connection of Nihang sects and the murder convict with Agriculture minister has fired up even more speculations.

Journalists Have a Lot to Learn From Bhagat Singh

“Can you think beyond caste and religion before thinking to get... 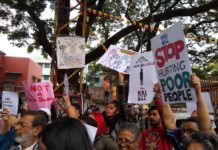 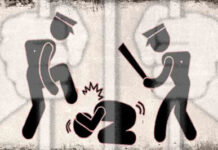