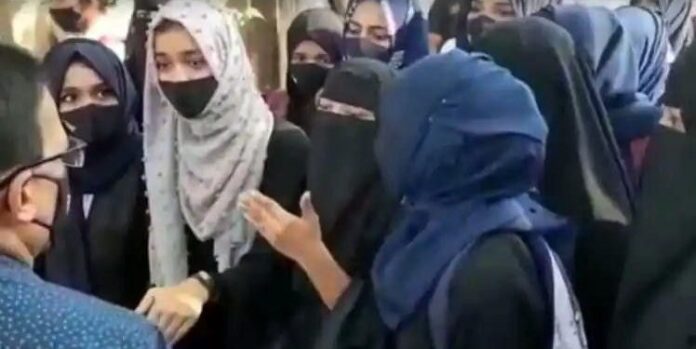 The incident happened inKamala Nehru Memorial College for Women in Shimoga and IDSG in Chikkamagaluru.

Students boycotted the classes after they were denied permission to enter the classes in hijab. As many as 20 degree students from Kamala Nehru Memorial College protested in front of the college accusing college authorities of forcing them to remove their hijab. When they staged a dharna, cops moved in and asked them to leave the college premises as the Shimoga district administration has imposed prohibitory orders within 200 meters of educational institutions.

Students from Malnad region boycotted classes on Wednesday to mark their protest against the Karnataka HC verdict which upheld the government ban on no wearing hijab during classes.

Degree students protested accusing the college authorities of overstepping their jurisdiction as the HC verdict pertains to only schools and PU colleges. Security was beefed up around several educational institutions that witnessed protests over the hijab row.

The protesting students argued that court verdict foes no apply to degree colleges. ” But still college authorities asked us to remove the hijab to attend classes. They are wrong to ask us not to wear the hijab. Students said.

There were similar protests in Karnataka Public College in Shiralakoppa in Shimoga district.

IDSG college in Chikkamagaluru also saw protests by Muslim girls when they were asked to remove the hijab. They said they will not remove the hijab until the case the settled in Supreme Court.

In Hassan district too, Women’s First Grade College in Hassan city too protested and refused to remove the hijab to attend classes. They said we want both hijab and education.

UN Special Rapporteur’s letter to the GOI on farm laws and...

BJP trying to hide its failures behind saffron shawls in Karnataka:Social...