Com. Sivaram, the Odisha state secretary of CPI(ML) Red Star and its youngest Polit Bureau member, passed away at 11.20 pm on 28th May night after he was admitted for post-Covid complications in hospital at Bhubaneswar. During the last 25 days he was in ICU and then in ventilator.

Com Sivaram, is known for his involvement in the slum people’s movement in Bhubaneswar, and class/mass organizations in a number of districts of the state, taking the message of the CPI(ML) to most parts of the state. He was part of movements such as the Chilka movement, the anti-POSCO movement for which he had to face police attacks and detention. He was also active in the relief work during the time of the super cyclone.

He is survived by Com. Pramila, his partner, and their son Sonu. The party expressed their condolences by saying, “The departure of such a energetic and young communist fighter at a time when the movement is struggling hard to overcome present great challenges is a big loss, which cannot be filled up easily. At this moment, it is not easy for all of us who knew him so well and worked with him, to get over the shock from his departure. But, his great revolutionary spirit demands us to overcome the shock, and carry forward the tasks for which he devoted his life. That will be the biggest tribute to him.”

Taxing the poor to help the poor: Behind the protests in Colombia

Tamilnadu: 23 year old hacked to death in the name of...

Voices Against the Privatisation of Visakha Steel Plant 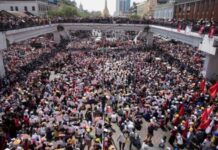