Chief economist C.P. Chandrashekhar has quit a government panel tasked with reviewing economic data over the situation at JNU campus

Chandrashekhar, an eminent statistician, and a former JNU professor has cited the present situation in JNU and his lack of faith in the committee’s ability to work in a fair manner as the reasons for his resignation.

Chandrashekhar in an email to the committee says that He was “disturbed” by the masked mob attack on students and teachers at the university on Sunday. “I regret to inform you that, because of the situation in JNU where I stay, I will be unable to attend tomorrow’s meeting,” Professor CP Chandrasekhar wrote in his resignation letter.

Chandrasekhar also raised doubts over the credibility of the committee in the email and informed the members that he will not be able to be a part of it.

“…I feel that, under current conditions, this committee is unlikely to be able to restore the credibility of the statistical system, which has been undermined in the recent past,” he said.

Chandrasekhar was also among 108 academicians who signed a joint statement in March 2019, flagging serious concerns over increasing “political interference” in the handling of economic data.

This is not the first time that concerns over government data and surveys have come under question.

Last year in January 2019, PC Mohanan acting chairman of the National Statistical Commission (NSC), a government-funded advisory body that checks the quality of official data resigned from his position over delay in releasing a new set of jobs statistics. This was followed by the resignation of another member of the advisory board, J. Meenakshi.

Who is afraid of the Data?

Many economists and social scientists have accused the Modi government of not releasing the Employment survey and economic conditions in the country 2017- 2019. Despite its many efforts to contain the survey data, many independent organisations and social scientists surveys gave a very bleak picture of the economy and job sector with  India staring at an all-time high unemployment rate.

Many relied on the data released by Cente for monitoring the Indian Economy (CMIE). The CMIE’s figures are with the findings of the latest Periodic Labour Force Survey, which had estimated an unemployment rate of 6.1% between July 2017 and June 2018, the worst in 45 years.

Modi government tried to deny, obfuscate CMIE data through lies and propaganda. It finally released the National Sample survey organization (NSSO) after the May 2019 general election a week after BJP came back to power.

In November 2019, when several reports indicated that rural spending has dropped for the first time in four decades, the government blamed the quality of the data and announced that it won’t release the findings of the Consumer Expenditure Survey 2017-18.

It was under these controversies over data that rocked the Modi government in 2019 that the government panel on economic statistics was created. 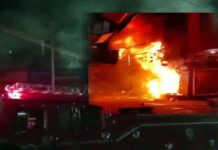