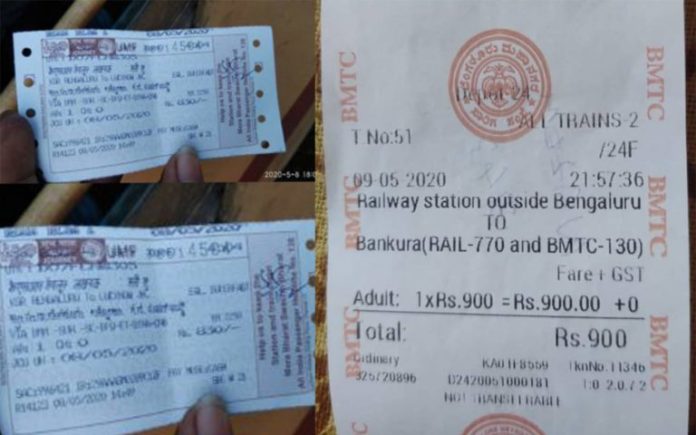 There is no end to the suffering of migrant workers in Karnataka. The central government last Monday boasted about the arrangement of the free train journey for the stranded  labourers. The Indian government claimed that it will bear 85% cost of the ticket fare, but it was found that migrant labourers had to pay for the full railway fare.

It was found that migrant workers who were going from majestic to Malur (Andhra Pradesh), Chikkabanavara and including many other railway stations had to pay the BMTC bus fare two or more times to that of the normal fare, leading to the further exploitation of the stranded labourers who were already suffering due to the lockdown.

When the government had finally announced to provide special Shramik Trains to the migrant labourers to return to their home but with no compensation of the fares. Many politicians, celebrities and civil society members had criticised this move of the central government. Sonia Gandhi had announced that the Congress party will pay for the tickets of the migrant labourers across the country.

Later the Central government announced that 85% of the railway fares will be borne by the center while 15% will have to be taken up by the state governments and that the fares will not be charged by the migrant labourers, but all these government claims have failed on the ground.

WHERE IS THE PM CARES FUND GOING?

Even after some trains have started, due to lack of facilities and the failure of the central government in ensuring free travel, many migrant labourers are forced to go by walk to their homes.

During these times, the central government which is supposed to help the workers is instead looting them. Government’s PM cares fund has collected thousands of crores but the question arises is why the information related to it is not being made transparent to the public. The fund could be used to pay for the tickets of migrant workers.

Each train is carrying around 1200 passengers, Karnataka state itself has around 5-6 lakh migrant workers. At this pace, It will take almost 2 months to move these workers to their homes. This is making workers even more frustrated. Therefore there is demand that more trains should be provided. Migrant workers already in pain, the government should work towards reducing the pain and not aggravating it.

Overall, migrant workers’ lives are uncertain from the beginning of the lockdown. There have also been accusations that the government has made it difficult for migrant workers by introducing new rules every other day.

The article was first published here in www.naanugauri.com. It was translated into Kannada by Neha Kumari. 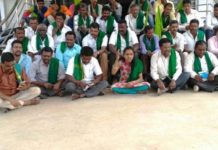 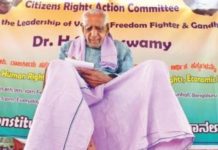 “We need to steel ourselves for a long battle” : Yogendra...

Tribute to A. K. Subbaiah: Social Advocate and Firebrand Politician