The violence that is erupting against CAA has taken over both Delhi and Meghalaya. In Meghalaya, over ten people have been injured, and reports of shops being burnt down by unknown people. These shops were on rent by the non-indigenous community. Three people have been killed in these riots. Uphas Udhin, Lurshai Hynniweta, and Rupchand Dewan are those who have been murdered. Violence erupted in Meghalaya after Lurshai Hynniweta was killed. In the aftermath of this murder, violence spread to various parts of Shillong. The killing took place after the Khasi Student’s Union took out a rally in East Khasi Hills, to demand ILP (Inner Line Permit), which regulates the entry of non-locals into Meghalaya, Nagaland, Meghalaya, and Arunachal Pradesh. The Khasi Student’s Union has been opposing the CAA and demanding the ILP since December. The clashes have been identified between KSU and non-tribals.

There have been reports of sporadic violence against non-tribals across Meghalaya. The curfew was relaxed on Saturday and has been re-imposed. It is the third day of the curfew and has been imposed for an indefinite period. As per orders, the internet has been suspended in six districts of Khasi and Jaintia Hills region. Areas that are to remain under curfew are Mylliem Block from Umshymi Bridge up to 7th Mile, Upper Shillong, Madanrting, Laitkor, Nonkseh, Umlyngka, Lawsohtun, Mawdiangdiang, Diengiong, and Siejiong. Central Forces have been deployed to curtail the violence in areas where violence broke out and the main city. Board examinations are the only activity that has been exempted from the purview of the curfew.

Meghalaya Director General of Police called upon the citizens, social and religious organization, and tribal bodies to “unite in fighting the menace of rumours and hate-mongering regarding the incidents that are happening in the State.” A helpline number has been set up for stranded tourists to escort them out of the state.

The Centre has still not taken any measures to re-evaluate the oppressive CAA due to which multiple lives have been lost, the property has been destroyed, and hundreds have been injured in many states across the country.

Resisting the invasion of Haiti: protests continue in 2022

Why The State is So Afraid of Akhil Gogoi? 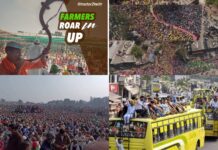