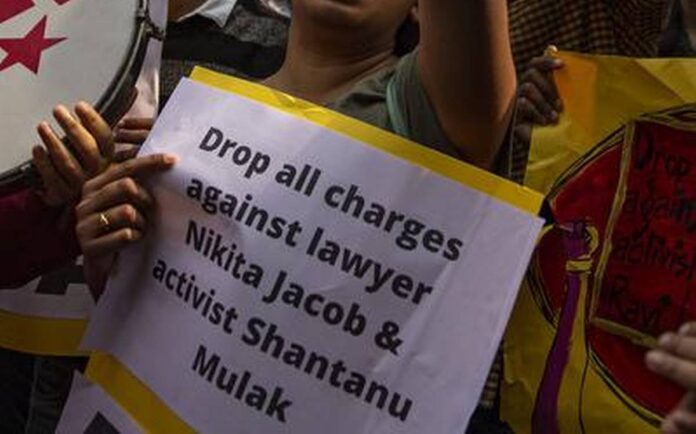 In a relief to activist-lawyer Nikita Jacob, who applied for transit anticipatory bail following a non-bailable warrant issued against her by a Delhi court in the toolkit case, the High Court of Bombay granted her protection from arrest for three weeks on Wednesday to allow her to approach the competent court or investigative officer.

Nikita Jacob approached the HC after the Delhi Cyber Crime Unit raided her home on 11 February and seized her computer and phone in connection with the toolkit that she and Disha Ravi, an activist from Bengaluru, had allegedly created.

The Delhi police claimed on Monday that she, along with Bengaluru environmentalist Disha Ravi and Maharashtra engineer Shantanu Muluk, had created a toolkit designed to tarnish India’s image. They were allegedly in direct contact with “pro-Khalistani elements” in the process.

Another activist, Shantanu Muluk, who had applied for transit anticipatory bail before the HC Aurangabad bench, was granted the same for a period of ten days on Tuesday.

The toolkit was intended to garner international support for the ongoing farmers’ protest against three new central farm legislation.

Yesterday, Ms Jacob told the court that there was a Zoom meeting before the Republic Day, attended by the founder of the Poetic Justice Foundation, MO Dhaliwal, and other fellow activists, including Ms Ravi. In a document submitted by her lawyer, she claimed that Extinction Rebellion (XR) India volunteers had prepared a “toolkit” to present the whole picture with a simple breakdown for an international audience.

Her advocate told the court that the police have confiscated her computers and cell phones, and now she’s scared of detention. Justice PD Naik has reserved his order for today.

In the meantime, Ms Ravi has already been arrested from Bengaluru in connection with the writing and distribution of the “Toolkit” document.

Why we need to be concerned about the DNA Bill?

Man Breaks Roza to donate Plasma and save lives of Two...

Karnataka: Exploitation of Workers at Wistron Responsible For The Factory Violence