If the administration of AUD has been consistent in something, it has been in creating constant chaos among students. Even during the pandemic, they didn’t fail to create a ruckus to disrupt the peace of students. Since the last few months concerns have been raised regarding the lack of infrastructural support to the students, especially for those from marginalized communities, in attending online education.

The fee structure in AUD is many times higher than other state universities in the country. Even during the pandemic, when students are struggling to make the ends meet, the AUD administration is adamant about levying high fees from the students.

Despite the many flaws and inconsistencies, the one policy that has always upheld social justice in the university was the full fee waiver extended to SC/ST/PwD students.

Since 2016, the policy of full fee waiver to SC/ST/PwD students was adopted in line with the Act of AUD to ensure reparative justice to students from marginalized communities.

Today, the policy is under review and this news comes to the students from a newspaper daily rather than from their own administration. It is highly disappointing that a university named after Dr. B.R. Ambedkar is even reconsidering whether or not to uphold social justice.

The policy on fee waiver was being reviewed by the Board of Management on Tuesday, information that the students got hold of from a newspaper article and not the AUD administration. The Students’ Council gave a call for protest on Monday to express the concern of the student community as the administration was not responding to any other means of expressing dissent.

However, this is not the first time that the AUD administration had the audacity to risk the students to Police detention.

After many hours of negotiation, the Students’ Council met with the AUD administration while the other students waited outside the gate under the threat of Police detention. Throughout the meeting, AUD administration, especially the Registrar of the university constantly tried to derail and disrupt the meeting. When the concerns were raised and the memorandum was read out, the administration faked their helplessness in making any promises as the policy on fee waiver will apparently be a decision of the Board of Management.

The student community of AUD is impatiently waiting for the decision of the Board of Management. The initial principle of the university in the name of Dr. B.R. Ambedkar to uphold social justice and economic rights of the socially marginalized is under threat. But the student community will continue to fight the rightwing agenda of the Sanghi administration.

Elizabeth Alexander is a research scholar at the School of Development Studies at Ambedkar University Delhi. The AUD administration has announced that the fee waiver will be reinstated but only for a year.

This is not a Punjab-centric movement!- Farmers from UP to Join Delhi Chalo Farmers Protests 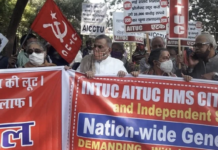 Workers Strike is a historic success & joined by 25 crore workers

Gujarat: 10 Dalit labourers attempted suicide, were on strike for 62...