DAV school in Gopalapuram, Chennai had been in news recently for publishing Misleading information about the violence on January 26 at Red Fort in Delhi. The violence that was widely reported took place in the national capital amidst the famous tractor rally that was carried out by several farmer organisations that have been protesting against the three farm laws passed by the Narendra Modi led central government. The school in a question paper had asked students to write an essay about this. All India Kissan Sangarsh Coordinating Committee, Tamil Nadu released a statement today, strongly condemning this pro government and anti-farmer stance taken by the management of the DAV School.

AIKSC Tamil Nadu has strongly condemned the act of setting up a question paper which suggests that the violence on January 26, 2021 was an international conspiracy. In its statement the Coordinating Committee observed that the question paper suggests that the protesting farmers indulged in criminal activities by damaging public property, insulting national flags and attacking the police. In its statement AIKSC Tamil Nadu noted that the school administration with questions like this was propagating ‘slanderous picture of farmers’ and they ‘strongly condemn this act of the school’.

This statement further observed that this incident is condemnable also because the Samyukta Kisan Morcha (SKM), a federation of more than 500 protesting farmers’ unions, has denounced the Delhi Police for complicity in the violence on January 26, 2021 at Red Fort.  Despite confirmation of this in the media the next day, when the DAV school management decided to go ahead with the question paper it made clear its intent. AIKSC sees this as a purposeful misrepresentation of the events that unfurled on the republic day.

The Tamil Nadu wing of the farmers’ Union has penned few questions for the DAV school administration.

I am ashamed of what I have done- Chinmayanand tells SIT... 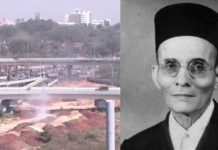 First Mahapanchayt in Karnataka at Shivamogga on March 20, 2021

Union Budget 2021-22: Continuation of Looting Farmers and Favoring Corporate in...